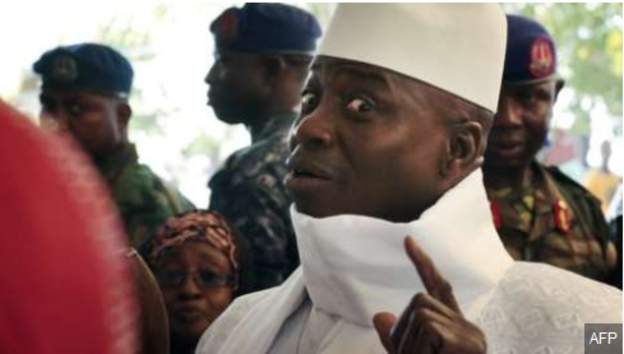 Eleven Gambian ambassadors serving in various countries around the world have called on outgoing President Yahya Jammeh to hand power and congratulate his rival Adama Barrow.Â

The diplomats' move comes in the wake of Mr Jammeh's decision to challenge the outcome of the 1 December presidential election, which he had initially accepted - even congratulating Mr Barrow.
In their joint appeal letter, the diplomats, including the ambassadors to Beijing, London, New York, Moscow and Brussels, say:
"We... strongly appeal for you to accept the choice of The Gambian people and facilitate a peaceful transfer of power to the President-Elect, Mr Adama Barrow."

The tone of their appeal is diplomatic rather than hawkish and credits President Jammeh's initial response to the result:
"Your statesmanly and televised acceptance of the election results in favour of the coalition candidate on 2nd December, was acclaimed and applauded throughout the world.
The fact that you further congratulated Mr Barrow on his victory and assured him of your support and guidance was testimony to the fact that you care for the progressive development of The Gambia in a peaceful and orderly transition."

Efforts by the regional grouping, Ecowas, to convince Mr Jammeh to step down have so far been unsuccessful.