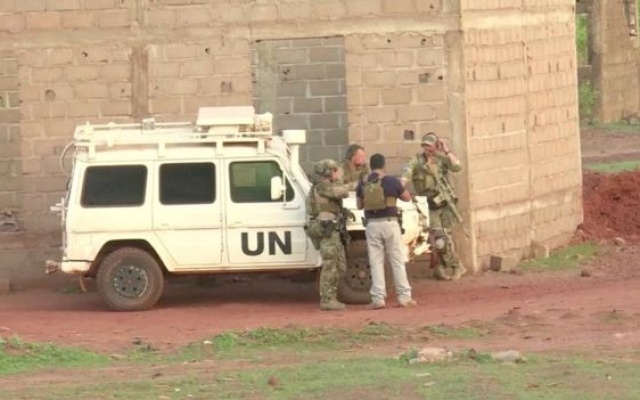 Gunmen have stormed a tourist resort in Mali popular with Westerners killing two people, the country's security minister has said.

"It is a jihadist attack. Malian special forces intervened and hostages have been released," Salif Traore told AFP news agency."Unfortunately for the moment there are two dead, including a Franco-Gabonese."The attack happened at luxury resort Le Campement Kangaba, east of the capital Bamako.The minister said four assailants had been killed by security forces."We have recovered the bodies of two attackers who were killed," said Mr Traore, adding that they were "searching for the bodies of two others".One of them left behind a machine gun and bottles filled with "explosive substances".The ministry said another two people had been injured, including a civilian.A security ministry spokesman told Reuters 32 guests had been rescued from the resort.Malian special forces intervened, backed by UN soldiers and troops from a French counter-terrorism force.Witness Boubacar Sangare was just outside the compound as the attack unfolded."Westerners were fleeing the encampment while two plainclothes police exchanged fire with the assailants," he said."There were four national police vehicles and French soldiers in armoured vehicles on the scene."He added that a helicopter was circling overhead.The European Union training mission in Mali, EUTMMALI, tweeted that it was aware of the attack and was supporting Malian security forces and assessing the situation.Earlier this month, the US embassy in Bamako had warned of "possible future attacks on Western diplomatic missions, other locations in Bamako that Westerners frequent".BBC correspondent Alex Duval Smith says many expats and wealthy Malians go to Kangaba at weekends, to enjoy the pools, cocktail bar, canoeing facilities, and other activities for children.Mali has been fighting a jihadist insurgency for several years, with Islamist fighters roaming the country's north and centre.In November 2015, at least 20 people were killed when gunmen took guests and staff hostage at the Radisson Blu hotel in Bamako.Al-Qaeda's North African arm, Al-Qaeda in the Islamic Maghreb (AQIM), said it was behind that siege.Mali has been in a state of emergency since the Radisson Blu attack. It was extended for a further six months in April.The country's security has gradually worsened since 2013, when French forces repelled allied Islamist and Tuareg rebel fighters from parts of the north.French troops and a 10,000-strong force of UN peacekeepers have been battling to stabilise the former French colony.Source: BBC