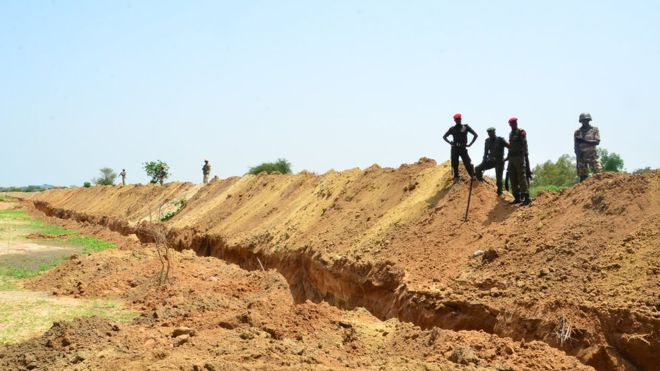 Share
Authorities in north-eastern Nigeria have begun digging a 27km (17 mile) trench around the University of Maiduguri to prevent attacks by Boko Haram Islamist militants. On Sunday three suicide bombers attacked the university killing themselves and a security guard.
There has been a dramatic upsurge in violence in Maiduguri in recent months.
Boko Haram, who want an Islamic state, loosely translates from Hausa as "Western education is forbidden".
Nigerian police say that in the first attack on Sunday, a suicide bomber blew himself up inside the grounds of Maiduguri's university, killing a female security guard.
Minutes later, four female suicide bombers then attacked two villages just outside the city, killing 12 people.
The trenches are designed to make it impossible for the militants to drive into the university as well as making it harder for them to access the campus on foot.
Borno state governor Kashim Shettima is financing the trench and has asked the Nigerian government for money to fund a permanent barrier.
Mr Shettima is also releasing money to pay allowances to guards drawn from local vigilante groups, who are working with the police to patrol the area.
He said that while the university was a federal institution, it was the Borno state government's responsibility to stop the militants from achieving their aim of forcing the university's closure.
Nigeria's government has said that Boko Haram has been defeated.
But, the BBC's Martin Patience in Lagos says that, for now, the army is failing to foil or stop the attacks.
Â
BBC
Â