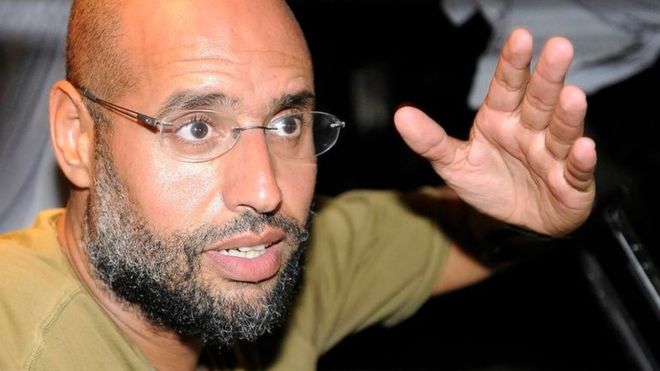 Share
The International Criminal Court (ICC) has called for the arrest and surrender of Saif al-Islam Gaddafi, who was released by a militia in Libya last week after six years in jail.
The son of late leader Col Muammar Gaddafi is wanted for alleged crimes against humanity during the rebellion that ousted his father in 2011.
His location is unclear. The UN-backed government has condemned the release.
It is feared that the move could fuel further instability in the country.
Saif al-Islam was freed from jail last Friday by the Abu Bakr al-Siddiq Battalion militia in the western town of Zintan under an amnesty law.
He has not been seen in public since then. A source told the BBC he was in the Tobruk area of eastern Libya.
Prosecutor Fatou Bensouda, of the Hague-based ICC, said her office was still trying to verify the release, and called on Libya and other states to arrest and surrender him.
"Libya is obliged to immediately arrest and surrender Mr Gaddafi to the ICC, regardless of any purported amnesty law in Libya," she said in a statement.

Mixed reactions: By Orla Guerin, BBC News, Tripoli
The re-emergence of Saif al-Islam Gaddafi could deepen old wounds and create fresh divisions in this fractured country. For those who gathered in Martyrs' Square in Tripoli six years ago demanding freedom it will be seen as a betrayal of the revolution. One man said it was like building a house just to have it torn down.
But many of those we spoke to around the square accepted his release. That is not so surprising perhaps given Libya's descent into chaos since his father was overthrown.
One woman said that those who had come after Col Gaddafi had made an even bigger mess in Libya, and his son might bring stability. In the words of a young man, better the devil you know.
The former playboy often appeared in the West as the public face of the Gaddafi regime, and was his father's heir apparent. His supporters will be hoping he returns to the political fray here, but he is still a wanted man.

The Abu Bakr al-Siddiq Battalion said it was acting on a request from the "interim government" based in the east of the country.
However, Saif al-Islam has been sentenced to death in absentia by a court in Tripoli, in the west of the country, where control is in the hands of the rival, UN-backed Government of National Accord.
The 44-year-old Saif al-Islam was captured in November 2011 after three months on the run following the end of Muammar Gaddafi's decades-long rule.
He was known for playing a key role in building relations with the West after 2000.
But after the 2011 uprising, he found himself accused of incitement to violence and murdering protesters.
Four years later, he was sentenced to death by firing squad following a trial involving 30 of Gaddafi's close associates.
Saif al-Islam: Heir to prisoner
ï‚§Â June 1972: Born in Tripoli, Libya, second son of Libyan leader Colonel Muammar Gaddafi
ï‚§Â February 2011: Uprising against Gaddafi government begins
ï‚§Â June 2011: International Criminal Court issues an arrest warrant for Saif al-Islam for crimes against humanity
ï‚§Â August 2011: Leaves the capital after Tripoli falls to anti-government forces; flees to Bani Walid
ï‚§Â October 2011: Father and younger brother killed
ï‚§Â 19 November 2011: Captured by militia as he tries to flee south to Niger. Imprisoned in Zintan
ï‚§Â July 2015: Sentenced to death by a Tripoli court in absentia
ï‚§Â June 2017: Reportedly released after being granted amnesty by one of Libya's two competing governments
Â
Â Â Â Â Â Â Â  BBC