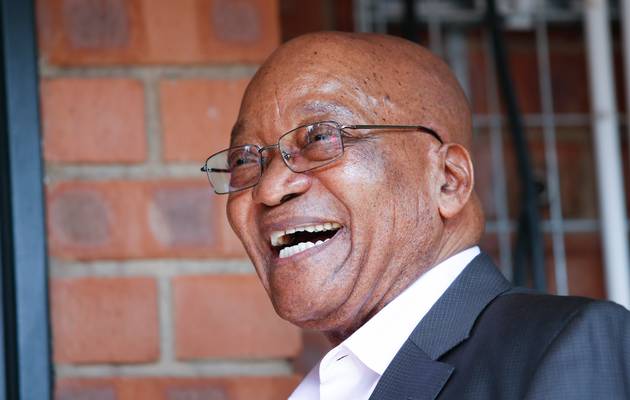 Share
South Africa's embattled president has been backed by a major decision-making body within the ruling ANC.
It was looking at a complaint by some of the ANC top executives that Jacob Zuma had failed to consult them over reshuffling his cabinet.
After considering the complaint, the ANC has decided not to press for Mr Zuma to resign, a party official said.
Mr Zuma has been under growing pressure since sacking respected Finance Minister Pravin Gordhan.
That led to South Africa's credit rating being cut to junk status putting more pressure on a troubled economy.
Mr Gordhan was dropped as part of a major cabinet reshuffle which left some in the ANC leadership questioning whether Mr Zuma should remain as president.
Key ANC allies, the South African Communist Party (SACP) and the main trades union federation Cosatu, joined in the calls for him to go.
But the party's National Working Committee (NWC), discussing the cabinet reshuffle, has given the president its backing.
It accepted that the dismissal came because of the "irretrievable breakdown" of Mr Gordhan's relationship with the president, the ANC Secretary General Gwede Mantashe told a news conference in Johannesburg.
Mr Mantashe praised new Finance Minister Malusi Gigaba, saying that he "is going to do a good job".
Mr Zuma has been cleared by the NWC of the charge that he reshuffled the cabinet without consultation.
He is said to have briefed top ANC officials in December of his decision to dismiss Mr Gordhan, but the leaders persuaded him to delay the sacking.
The NWC is the ANC's second most important decision-making body, the first being the party's integrity committee.
It now remains to be seen how the integrity committee will proceed from this point, the BBC's Pumza Fihlani in Johannesburg says.
What is significant with this situation is that it is the first time key ANC's allies publicly turned on Mr Zuma, our correspondent adds.
At his press conference on Wednesday, Mr Mantashe lashed out at the SACP and Cosatu for speaking to the media about ANC's internal affairs.
He accused the two allies of betraying the ANC's confidence when they went public with disagreements over the reshuffle list.
Â
BBC
Â