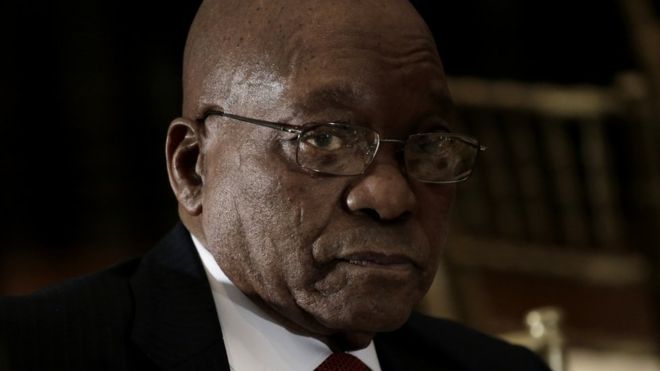 President Jacob Zuma of South Africa is facing a vote of no confidence from the leaders of his own party, the ANC.

He has survived several parliamentary votes but this is the first time the ANC will formally discuss his position.
The top ANC body has extended its meeting to debate the motion, tabled by Tourism Minister Derek Hanekom.
Mr Zuma has increasingly come under criticism over corruption allegations, with a recent report highlighting his links with the wealthy Gupta family.
At least two other cabinet ministers are understood to be backing Mr Hanekom's proposal - Health Minister Aaron Motsoaledi and Public Works Minister Thulas Nxesi.
Criminal activity
The BBC's Karen Allen in Johannesburg says this could shape into the toughest battle of Zuma's career.
Earlier this month, an investigation by the country's anti-corruption watchdog said a judicial inquiry should be set up to further investigate allegations of criminal activity in Mr Zuma's government.
The investigation found evidence that the Guptas, a business family with links to Mr Zuma, may have wielded undue political influence over the appointment of ministers.
Both Mr Zuma and the Guptas have denied any wrongdoing.

Analysis: Pumza Fihlani, BBC News, Johannesburg
The stage has been set. President Jacob Zuma is in a battle for his political life.
In one of the first real pushes within the ruling African National Congress (ANC), top party officials are now officially debating the president's removal.
More than 80 National Executive Committee (NEC) members have been at loggerheads in a closed meeting in the capital Pretoria since the weekend.
While Mr Zuma is believed to still have a lot of support within the party, some ministers are calling for a secret vote on the matter, hoping this would help people within the party to vote freely.
There have been numerous attempts by civil society and even opposition parties to have the president sacked but analysts have always said it would take the party itself to remove Mr Zuma - as it did with former President Thabo Mbeki.
Those who want him gone say that the president has become a liability to the more than 100-year-old liberation movement - claims he and his backers have denied.
Mr Zuma's political time in office has been overshadowed by scandals, accusations of corruption and a lack of leadership.
But Mr Zuma, a master strategist, who has been nicknamed "The Teflon Don" on local social media has proven to many that he is a survivor.