South Africa's Zuma 'not afraid of jail' amid corruption accusations 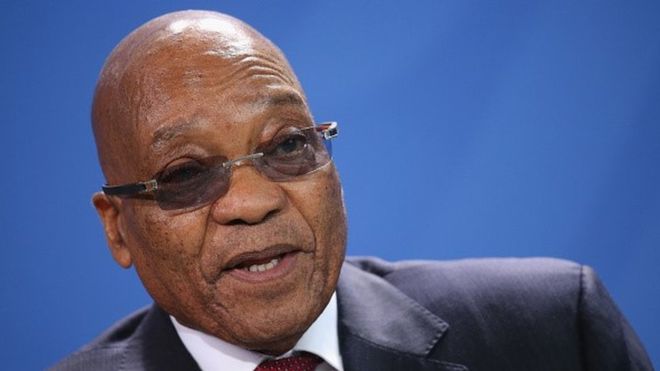 South Africa's embattled President Jacob Zuma has said he is not scared of going to prison, days after an investigation found evidence of possible government corruption.

This was his first public appearance since an anti-corruption report asked for a judicial inquiry.
Mr Zuma, 74, is accused of an improper relationship with wealthy businessmen. He denies any wrongdoing.
Thousands of people took to the streets on Wednesday demanding his resignation.

The 355-page report entitled State of Capture focused on allegations that Mr Zuma allowed the Guptas, a wealthy Indian business family close to the president, to influence cabinet appointments.
The Gupta brothers have not commented, but they have previously denied any wrongdoing.

Mr Zuma, who spent 10 years as a political prisoner on Robben Island with Nelson Mandela during apartheid (white minority rule), told a cheering crowd in his home province of Kwa-Zulu Natal: "I'm not afraid of jail. I've been to jail during the struggle.
"There's no longer any space for democratic debate. The only space there is for court arguments by lawyers. That's not democracy," he added.

Mr Zuma, who is also the leader of the governing African National Congress (ANC), has been dogged by corruption allegations for more than a decade. He had tried to block the release of the report, but dropped his court bid.
He faces a vote of no confidence in parliament next week. He survived two similar votes earlier this year.