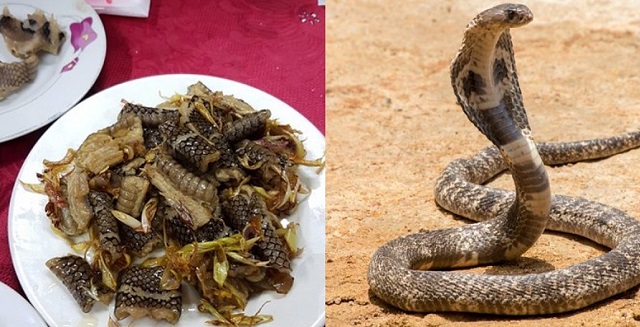 A 34-year-old Ugandan man Kenneth Odiom has shocked people after he allegedly ate a cobra to avenge for his lost chicken.

Odiom hailing from Kwapa Central village in Tororo district amused people when he went into hunting for a dangerous, venomous cobra snake that has been killing his chicken to avenge.

He later found the animal and killed it and ate it.

according to Odom, the giant serpent had the habit of grabbing his chickens before slithering to feast on them in its home in anthill just outside Odiom’s compound.

Fed up and perhaps hungry, Odiom first dug up the anthill, smoked out the cobra, chopped off its head then skinned it after immersing it in boiling water.

He then chopped it into pieces; dip fried it, and feasted on it as villagers looked on in awe as eating a snake was unheard of in the area.

But Odiom, who is a transporter, possibly picked interest in eating snakes from his travels to neighbouring DR Congo.

He washed the meal down with a glass of juice and a beer. Not all snakes are safe to eat. The cobra is eatable because it is venomous but not poisonous.