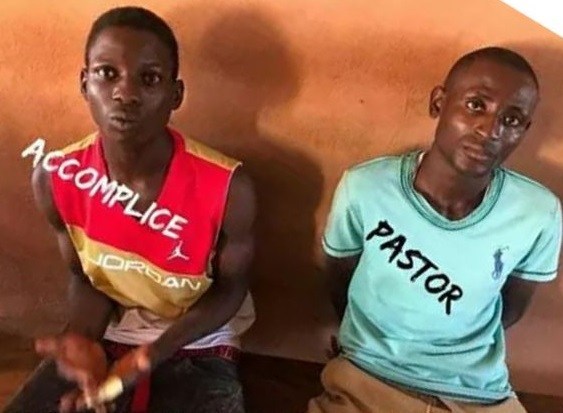 The long arms of the law have finally gripped a priest in the Methodist Church, identified as Rev. Peter Adegoke Adewuyi for faking his own kidnap with the intention of making his church members and other concerned individuals pay a ransom.

The Ekiti State Police Command who effected his arrest also picked up one Sunday Oluwadare Adewole who was helping the priest in making calls to unsuspecting members of the public to demand a ransom.

The culprit, who is 31-year-old was said to have perfected his evil plans by lodging in a hotel in Ado-Ekiti and hid from public view from where he and his accomplice were making calls to the members of the public to pay ransom for his release.

He claimed that his ‘captors’ demanded N3 million ‘ransom’ before he could regain his freedom. The development reportedly threw his church into confusion with members raising cash to pay the ransom for what turned out to be fake kidnap saga.

The phony kidnap stunt was busted by the Police who intercepted and arrested the holder of the phone with GSM Number: 09078589516, with which the N3 million ransom was being demanded.

Unknown to the priest, he was being tracked to a location near First Bank in Okeyinmi area of Ado Ekiti, where he went to pick the ransom. While being interrogated by the Police, Adewuyi confessed to having masterminded his own ‘kidnap.

The priest also confessed that he lodged at a hotel during the period of his self enforced disappearance from the public.

The two suspects are presently being detained at the State Criminal Investigation Department (SCID) of the State Police Headquarters.