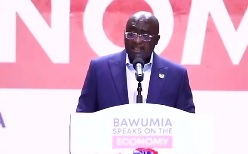 Dr Bawumia has blamed the current economic hardships in Ghana on the ongoing geopolitical tension between Russia and Ukraine.

Explaining why the Russia-Ukraine war is responsible, he stated that Russia accounts for some 30 per cent of Ghana’s imported grains , 50 per cent of flour and 39 per cent of fertilizer.

The warfare, therefore, affected the local economy, he said.

“The increase in commodity prices has been exacerbated by the Russia-Ukraine conflict. Russia and Ukraine together account for 30 per cent of the global wheat export. The longer the conflict the greater will be the disruptions to global food supply. The country is also likely to slow global growth.

“Russia accounts for some 30 per cent of Ghana’s imported grains, 50 per cent of flour and 39 per cent of fertilizer . So we are directly affected by the Russia-Ukraine ware. Unfortunately, we do not know when it will be over. The global increase in fuel prices is causing hardship.”