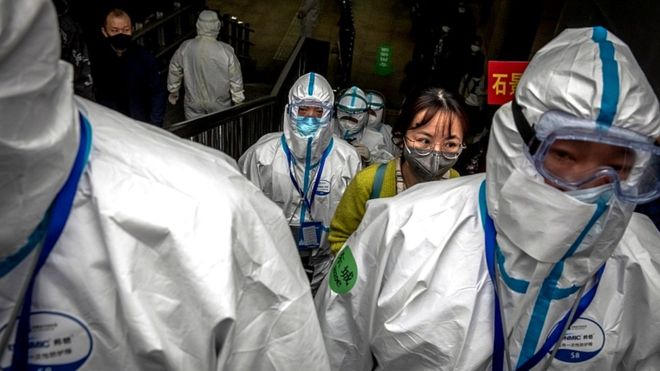 China's economy shrank for the first time in decades in the first quarter of the year, as the virus forced factories and businesses to close.

The world's second-biggest economy contracted 6.8% according to official data released on Friday.

The financial toll the coronavirus is having on the Chinese economy will be a huge concern to other countries.

China is an economic powerhouse as a major consumer and producer of goods and services.

This is the first time China has seen its economy shrink in the first three months of the year since it started recording quarterly figures in 1992.

"The GDP contraction in January-March will translate into permanent income losses, reflected in bankruptcies across small companies and job losses," said Yue Su at the Economist Intelligence Unit.

Last year, China saw healthy economic growth of 6.4% in the first quarter, a period when it was locked in a trade war with the US.

In the last two decades, China has seen average economic growth of around 9% a year, although experts have regularly questioned the accuracy of its economic data.

Its economy had ground to a halt during the first three months of the year as it introduced large-scale shutdowns and quarantines to prevent the virus spread in late January.

As a result, economists had expected bleak figures, but the official data comes in slightly worse than expected.

The huge decline shows the profound impact that the virus outbreak, and the government's draconian reaction to it, had on the world's second largest economy. It wipes out the 6% expansion in China's economy recorded in the last set of figures at the end of last year.

Beijing has signalled a significant economic stimulus is on the way as it tries to stabilise its economy and recover. Earlier this week the official mouthpiece of the ruling Communist Party, the People's Daily, reported it would "expand domestic demand".

But the slowdown in the rest of the global economy presents a significant problem as exports still play a major role in China's economy. If it comes this will not be a quick recovery.

On Thursday the International Monetary Fund forecast China's economy would avoid a recession but grow by just 1.2% this year. Job figures released recently showed the official government unemployment figure had risen sharply, with the number working in companies linked to export trade falling the most.

China has unveiled a range of financial support measures to cushion the impact of the slowdown, but not on the same scale as other major economies.

"We don't expect large stimulus, given that that remains unpopular in Beijing. Instead, we think policymakers will accept low growth this year, given the prospects for a better 2021," said Louis Kuijs, an analyst with Oxford Economics.

Since March, China has slowly started letting factories resume production and letting businesses reopen, but this is a gradual process to return to pre-lockdown levels.

China relies heavily on its factories and manufacturing plants for economic growth, and has been dubbed "the world's factory".

Stock markets in the region showed mixed reaction to the Chinese economic data, with China's benchmark Shanghai Composite index up 0.9%.

Japan's Nikkei 225 jumped 2.5% on Friday, although this was largely due to gains on Wall Street after US President Donald Trump unveiled plans to ease lockdowns.