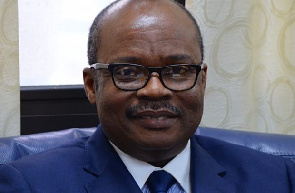 The Governor of the Bank of Ghana (BoG), Dr Ernest Addison, has downplayed concerns that newly formed lender, Consolidated Bank Ghana Limited (CBG), is facing a liquidity crisis that can affect its operations and sustainability.

He said at a news conference in Accra that the central bank had recently monetized some GH¢3 billion of the GH¢5.76 billion bond that was issued to the bank in August 2018.

This has provided ready cash for the bank to meet withdrawal demands, Dr.Addison said on January 4 in response to a Daily Graphic question on the liquidity position of the bank.

“So, the initial liquidity issues that they had are not there; CBG has a lot of resources, they got GH¢3 billion from BoG.

“They have that liquidity to do business with and so I think you should have confidence in them,” he said.

As a result, the governor urged the public to disregard what he termed “misinformation” about the liquidity position of CBG and instead have faith in it as it was capable of meeting all customer demands.

CBG, which was established in August 2018, assumed the selected assets and all liabilities of five failed banks.

It was recapitalized with GH¢450 million and issued a bond of GH¢5.76 billion to cover the gap between assets and liabilities assumed.

Since then, the bank has reportedly gone through various liquidity challenges that partly forced it to downgrade investments it assumed, restructure withdrawal requests and generally rationalize deposit contracts that it inherited from either the BEIGE, uniBank, Royal, and Sovereign Construction banks, whose licences were revoked and their assets and liabilities used to form CBG.

In November last year, international newswire, Bloomberg, quoted the Ghana Securities Industry Association as saying that its members had accepted a proposal by CBG to forfeit yields on their investments of up to 19 percent for a five-year zero-rated bond at an annualised rate of 7.5 per cent.

The newswire said the industry’s exposure to CBG was up to GH¢1.1 billion.

At the press conference, which announced the results of the central bank’s reforms and the recapitalization directive, the assets and liabilities of two more banks, whose licences were also withdrawn, were added to CBG under a purchase and assumption agreement.

As was the case with the five banks, Dr.Addison said the government issued a GH¢1.4 billion to cover the gap between assets and liabilities.

With the earlier bond, the governor said the central bank had monetized it.

“What that means is that we have literally bought the bond off CBG and given them cash,” he said.

“So, the initial liquidity issues that they had are not there; CBG has a lot of resources, they got GH¢3 billion from BoG,” he said.

Consequently, he said, he was confident that the assuming of “towing small banks such as Heritage and Premium banks will change the developments there significantly.

“We have given them literally, that central bank guarantee and if they need an additional GH¢1 billion to pay depositors, the central bank will provide it,” he said.

With this assurance, he asked: “why should you doubt that CBG will not have liquidity?”