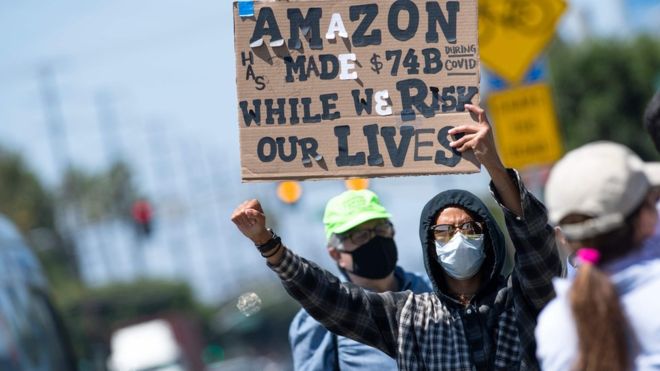 A vice president at Amazon has quit "in dismay" at the internet giant's crackdown against workers who criticised it over coronavirus safety measures.

Tim Bray said the firing of protesters was "evidence of a vein of toxicity running through the company culture".

Workers have criticised Amazon for not doing enough to protect warehouse staff against the virus.

Amazon did not respond to a request for comment.

Mr Bray, who was a senior engineer at Amazon Web Services, set out in a blog why he had left the company where he had worked for five years.

Amazon is facing possible investigation in New York, where the company fired the organiser of a small protest about safety conditions at a warehouse there.

Mr Bray said that last month Amazon also fired office staff who had been organising another protest and had spoken out against the company on climate issues.

"At that point, I snapped," he wrote, adding that he raised his concerns internally first.

"That done, remaining an Amazon [vice president] would have meant, in effect, signing off on actions I despised. So I resigned," he wrote.

Mr Bray said working at the firm had been "rewarding fun" and his decision would cost him financially.

"What with big-tech salaries and share vestings, this will probably cost me over a million (pre-tax) dollars, not to mention the best job I've ever had, working with awfully good people. So I'm pretty blue," he wrote.

However he said: "Firing whistleblowers isn't just a side-effect of macroeconomic forces, nor is it intrinsic to the function of free markets.

"It's evidence of a vein of toxicity running through the company culture. I choose neither to serve nor drink that poison."

Amazon has been facing renewed scrutiny over its business practices as the pandemic pushes the company into overdrive to fill online orders from people in lockdown.

The e-commerce giant temporarily shut its six warehouses in France after a court ordered it to stop all but essential deliveries.

Amazon's chief executive Jeff Bezos - one of the world's richest people with a fortune of $138bn - has also been asked to speak before the US Congress as part of a broader investigation of monopoly power.

Amazon last week warned investors that the pandemic had forced costly changes to the business, including spending on protective gear and adjustments to operations that make its warehouses less efficient.

It said it expected to spend $4bn - its anticipated quarterly profit - on coronavirus measures in the three months through June.

Sales are booming, however, and it expects sales to rise as high as 28% in the current quarter.