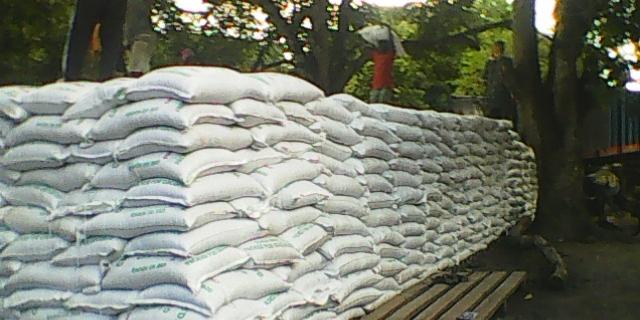 Patronage of fertiliser for this year’s planting season is hitting a snag – an all-time low – as farmers are currently having difficulties procuring the commodity for crop production due to rising costs.

Although there is an appreciable amount of fertiliser in the system, according to the Peasant Farmers Association of Ghana (PFAG), high cost of the product is deterring patronage by farmers.

The rise in prices of fertiliser can be blamed primarily on two things – the reduction of subsidy from 50 percent to 15 percent by government, and global events like the Russian-Ukraine war, as both countries export 28 percent of fertilisers made from nitrogen and phosphorous, as well as potassium.

“Planting has started; but farmers are not able to purchase both subsidised and open market fertilisers, not because they don’t need it, but simply due to the cost involved”, Head of Programmes and Advocacy at PFAG, Dr. Charles Nyaaba confirmed to the B&FT.

A 50kg bag of subsidised fertilizer, currently sells at GH¢320; a peasant farmer will require not less than GH¢1,000 for an acre of production, with at least 5-acre of cultivation requiring fertilisers worth GH¢5,000.

The open market price of 50kg bag is GH¢400 and GH¢480 in some locations across the country.

The above expenditure excludes the cost of agro-chemicals and tractor services, as well as other production factors.

The cost of a subsidised 25kg bag of fertiliser which was sold at GH¢53 last year, now sells at a subsidised rate of GH¢160, with the open market price of same which was GH¢150 now selling at almost GH¢300.

Equally, agro-chemicals that were sold at GH¢20 last year, now sells at GH¢55 with the prices going as high as GH¢70 in some locations across the country.

This situation, PFAG said, are constraining farmers, especially smallholders and women who are financially limited in coping with the rising cost of the commodities; hence, the low patronage.

As farmers have found money to plough the land, purchased seeds and planted, they are constrained in buying fertilisers, Dr. Nyaaba indicated, adding: “These happenings are likely to affect yield”.

“These are the real issues on the ground. Farmers are going through several challenges which must be looked at,” Dr. Nyaaba said.

Government, this year, has been proposing organic fertilisers application as a renewed focus for farmers under the Planting for Food and Jobs initiative since the cost of organic is relatively affordable than chemical inputs.

But the challenge remains that farmers are still not patronising the organic inputs as most of them are not used to organic fertilisers farming.