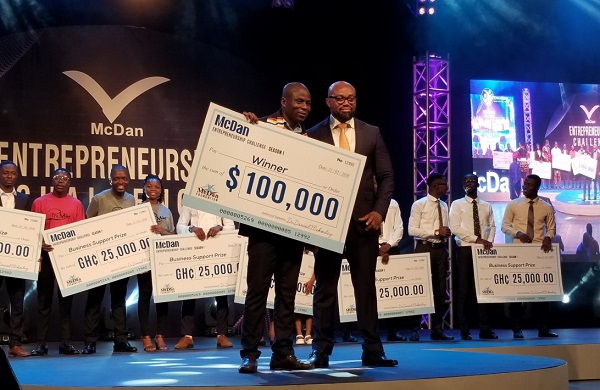 The founder of the McDan Group of Companies, Mr Daniel Mckorley has pledged to support the next generation of Ghanaian entrepreneurs to grow and advised them to be disciplined in order to accomplish their vision of becoming multi-million-dollar entrepreneurs.

He noted that bad attitudes and indiscipline could easily collapse budding businesses since research had shown that out of 100 small-scale enterprises only 10 succeeded in becoming multi-million-dollar ones.

Mr Mckorley was speaking last Friday during the season finale of the McDan Entrepreneurship Challenge.

He also entreated young entrepreneurs to be innovative and creative in their dealings to make headway in life and positively impact on the national economy.
McDan Entrepreneurship Challenge

Mr Alhassan Hamza Akoligo, a young entrepreneur who established Alkoh Shea Butter at Gambaga in the North East Region won the Season One of the McDan Entrepreneurship Challenge, taking home the $100,000 prize money.

He beat nine other finalists to win the prize at the grand finale held at the National Theatre in Accra.

Each of the nine received GHÂ¢25,000.00 from McDan Foundation, established by Mr McKorley, the Founder of the McDan Group of Companies.

The Ministry of Business Development also pledged to support the nine others with a total of GHÂ¢300,000.00 to scale up their businesses while the Ghana Investment Promotion Centre (GIPC) pledged to send the winner and the first runner-up on a VIP business trip abroad.

The 10 finalists pitched their business ideas and plans before a jury and after over three hours of exhaustive presentations, Akoligo, who is into processing and production of quality shea butter, using modern technology, emerged the winner.

The competition started about eight months ago, which saw 7,000 applicants nationwide, comprising young indigenous entrepreneurs, presenting their business models and hoping to receive financial support from McDan Foundation, the programme organisers, to expand their businesses.

Mr Akoligo, who was emotional after receiving the dummy cheque of $100,000, in his acceptance remarks, expressed profound gratitude to McDan Foundation for recognising his business model and promised to work harder to make his dream of becoming a multi-million-dollar entrepreneur materialise.

He paid glowing tribute to his mother, who initially employed him to assist in her shea butter processing and selling trade, and promised to support her.

Mr Augustine Blay, the Executive Secretary at the Office of the Vice President, re-affirmed Governmentâ€™s commitment to supporting the youth to grow and expand their businesses.

He said government disbursed 70 million Ghana cedis affordable micro and small loans to young entrepreneurs, last year, through the Microfinance and Small Loans Centre (MASLOC) and gave the assurance of creating external markets for their products.

Dr Ibrahim Mohammed Awal, the Minister of Business Development, in an address read on his behalf, said the Ministry was established to create business incubators and sustainable businesses.

It intended, therefore, to train 15,000 young entrepreneurs this year and provide financial support to 5,000 of them, he added.

The event attracted captains of industry, accomplished and young businessmen and women, traditional rulers and students from second cycle and tertiary institutions.