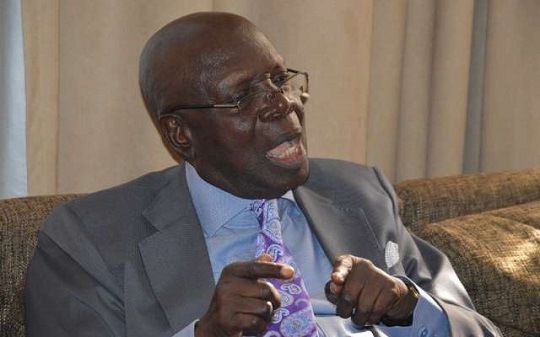 Having reversed a policy of not seeking aid from the International Monetary Fund, the government requested a balance of payment package following serious economic crisis characterised by record high inflation, currency depreciation and rising food prices.

The mooted US$3 billion deal is expected to be in place by end of this year and Dr. Yamson believes the intervention would restore much-needed investor confidence and economic stability.

READ ALSO: Ghana-IMF $3bn deal to be finalised before end of year

“I think it is a good move,” Dr. Yamson spoke on the sidelines of an event by Private Enterprise Federation (PEF) to honour him as its first President, between 1994 and 1997.

“This is not the first time we are going to the Fund.  This is the 17th one which is a shame but every time we are under the programme, we have some stability and growth in the economy. So I am looking forward to a very vibrant economy, post the Fund’s programme.”

IMF’s Managing Director, Kristalina Georgieva, has assured that the deal will be ready by year end, following a meeting with President Nana Akufo-Addo during the recent Africa Adaptation Summit, a conference on climate change, in Rotterdam, The Netherlands.

The country’s last IMF programme ended in 2019 with some significant macroeconomic gains.

Asked what can be done to ensure that the country does not go back to the IMF again after the current deal, he said government should learn to live within its means by ensuring prudent fiscal management.

“All the time we live beyond our means and if you live beyond your means, you would go to the IMF. So, if we don’t want to go to the Fund again then we need to have a very prudent fiscal environment and prudent management of the economy.

We just have to be disciplined and we should set our eyes on creating a long-term prosperous economy.”

He also observed that the real test would come after the programme and building a solid economy post IMF will require tough and sometimes, not too popular decisions.

Explaining further, he said all hope is not lost and that it took 30 years for countries in the far East to become donors.

“So it is possible but we need to do what is necessary; be prudent, disciplined, think long-term, be bold – do the courageous and wise things. You don’t do things that will make you popular simply because it makes you look good, but do things that may not even be good in the short-term but in the medium to long term, will benefit the country.

Those are some of the lessons; nobody needs to tell us what to do, we know the right thing, we just have to do it!” he added.

Dr. Yamson, then the president of Association of Ghana Industries, together with his colleagues from Ghana National Chamber of Commerce and Industry, Ghana Employers Association, Federation of Associations of Ghanaian Exporters, and Ghana Association of Bankers, established the Private Enterprise Foundation, now Private Enterprise Federation, in 1994, with the main objective to influence national policy initiatives to create an enabling environment for private sector businesses to thrive.

Through his leadership, the Federation was inaugurated on 25th January 1995 with USAID offering to sponsor its operations for the first five years.

He led PEF from 1994 and 1997 and contributed to greater public-private sector engagements on key economic policies such as the Value Added Tax and implementation of the Ghana Education Trust Fund.

“The story of Private enterprise Federation cannot be told without making mention of Dr. Ishmael Yamson. The PEF/Yamson relationship dates back to the formative years of the Federation,” PEF’s Chief Executive Officer, Nana Osei-Bonsu said.

Now aged 80, Dr. Yamson has stated his desire to retire from business leadership which includes serving as President of many business associations and on boards of many public and private institutions including MTN Ghana.

Considering his impact in manufacturing, telecoms, banking, finance, education, health, extractives and the domestic private sector, the current leadership of PEF said it saw it prudent to celebrate this beautiful milestone with him.

He was presented with a citation.

During his time, he single-handedly donated a 1.08 acres land to PEF located at Ridge West, Accra. The land has become the single most priceless valuable which PEF has leveraged on to generate some funding to support its operations, Dr. Osei-Bonsu said.

“Dr. Yamson, comes across as a genre who has always been a shining example wherever he has worked and the seed he sows always grow to become a flamboyant tree whose branches become formidable nest for all and sundry, and celebrating him in a modest way such as this, is not only a beaconing example to the younger generation but a demonstration of appreciation to a patriotic citizen that nations struggle to find and we consider it worthwhile to show our modest appreciation to this gentleman.

So, on the occasion of his retirement, PEF would like to join all and sundry to say a big thank you to Dr. Ishmael Yamson to wish him well and pray the good Lord to grant him a peaceful retirement,” Dr. Osei-Bonsu further said.