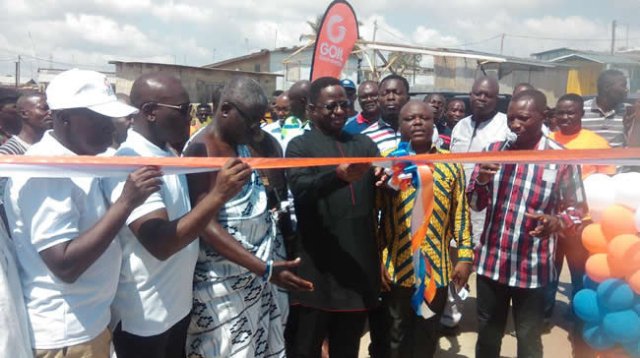 The National Petroleum Authority (NPA) in collaboration with the Ghana Oil Company Limited (GOIL) has outdoored a standard premix retail outlet at Winneba in the Central Region.

The Winneba Outlet is the sixth of its kind, to be commissioned by the NPA. The other five have been sited at beach landing sites in the Greater Accra and Volta regions.

The Energy Minister, John Peter Amewu who was the Guest Speaker, said the retail outlet would bring convenience to the fisher-folks who hitherto had challenges accessing premix fuel.

It would also lighten their trading financial burden trade and enable them to access fuel directly from the outlet without any middlemen.

The Minister said this would discourage the practice of diversion and ensure efficient and equitable distribution of premix fuel to fisher folks and also reverse the perennial challenge of shortages.

The CEO of the NPA, Mr Alhassan S. Tampuli said the construction of the premix retail outlets demonstrated their commitment to improving standards and safety in the petroleum downstream industry.

The facility follows the first prototype premix retail outlet constructed by the NPA in 2013 at Brawire, near Axim.

The menace of diversion and hoarding associated with premix fuel distribution had reduced, he said, adding that, the fuel was now adequately available to fisher folks at affordable prices.

"The drastic reduction is attributed to programmes and policies rolled out by the NPA in collaboration with National Premix Fuel Secretariat to monitor the distribution of premix fuel to ensure that the subsidised premix fuel gets to the fisherfolks," he said.

Mr Osei-Kwame Prempeh, Group CEO of GOIL, said he was happy that the NPA nominated the state-owned Oil Marketing Company, GOIL, to spearhead the construction and operation of the outlets.

"It is our expectation that these retail outlets will serve the purpose for which they were constructed to ensure safe distribution and handling of premix at the respective landing beaches," he said.

He advised the fishermen to employ in safety practices when dealing with the fuel.

GOIL, he said, would ensure that the fishermen had adequate premix fuel for their fishing.

Chief Fisherman of Winneba, Neeyin Mber who spoke on behalf of fishermen in the area, thanked the NPA and the Government for the premix retail outlet on their land.

He said they would patronise it to make their operations successful.

The event was chaired by Mr John B. Ninson, the Municipal Chief Executive of Effutu District. It was attended by members of the fishing community and some residents of Winneba.