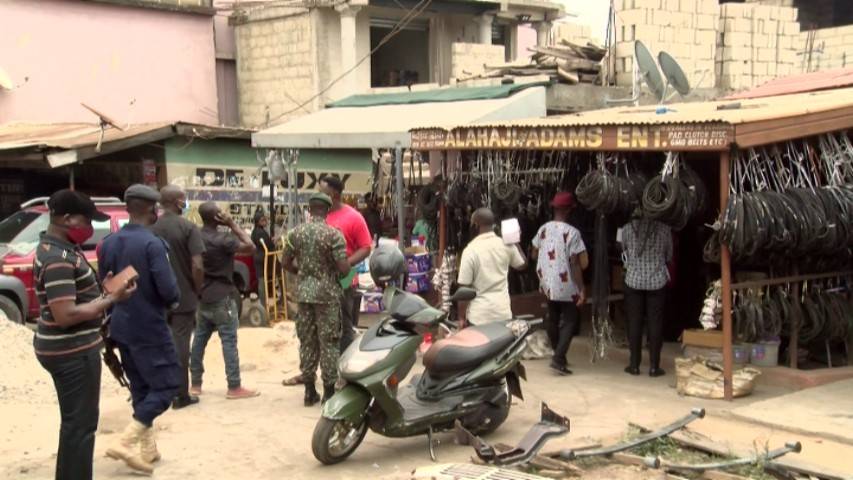 Members of the Nigerian Union Traders Association of Ghana branch in Kumasi in the Ashanti Region say they have been targeted by the Committee on Foreigners in Retail mandated to crackdown on foreigners engaged in illegal retailing business in the country.

According to them, all the 92 shops locked up by the committee belongs to Nigerians and no other foreign national shop has been locked up.

Addressing a press conference in Kumasi today, Thursday, 27 August 2020, Chairman of the Nigerian union traders, Chief Kizito Obiora Ikechukwu, said some of their members have their documents intact and showed to the committee but they still locked up their shops.

He called on the Ghanaian government to make them know if it does not want them to stay in Ghana because they cannot stay and be dying.

He also alleged that since the Ghanaian government planned to embark on the exercise of locking their shops this year, the Ghanaian authorities have refused to renew their residence permit despite several attempts.

Those who have been able to renew their permit, Chief Ikechukwu said, did so through middlemen and paid huge sums of monies.

He, therefore, called on the Nigerian government to come to their aid.

Mr Ikechukwu said: “We’re here because of our predicament. Since Tuesday 26 august, some team of government inter-ministerial taskforce visited our business places and closed all Nigerian shops. Why I say Nigerian shops is that to the best of our knowledge and per our records, they have never visited any foreigner as far as Ashanti is concerned, only Nigerians.

“At the moment, the 91 shops closed down are all totally owned by Nigerians. That’s why we think it will be good to let the whole world know, especially our own Nigerian government, our hard-working president Buhari to quickly come to our aid because we are dying. We are dying here in Ghana.”

A Trade Ministry Committee on foreign retail trades has clamped down on violators of trade laws in Kumasi.

In the exercise, a total of 92 shops belonging to foreign traders at the Suame Magazine artisanal hub who have violated these laws were closed down.

51 shops were closed on Tuesday and another 41 shops on Wednesday.