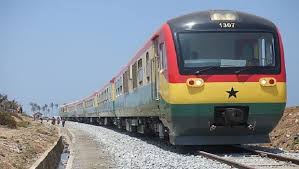 Minister for Railways Development, Joe Ghartey has disclosed that the government has approved 230 million dollars for the purchase of new coaches for the railway sector in the country.

Addressing Journalist on May 8, the sector Minister said the step taken by the government is the first in history.

According to him, this will improve the growth of the sector immensely.

"...Good news for Ghanaians is that President has given approval for I think 230million dollars to be used to purchase rolling stock that will be the largest amount of rolling stock that has been bought at a single time since independence..."

Touting the achievements of the current government in the sector, Joe Ghartey said the transformation agenda for the sector is work in progress and Ghanaians will soon see the improvement in the railway sector.

"We could do better but under the circumstances we are doing quite well, now even the three cedi fare per person we will look at it, they won't look at in terms of reducing it but a flat rate has it own problems and we must put in a system that allows people to pay different rate for different parts of the ride but you recall that one of the things we said right at the beginning is that this is work in progress, you have an option in life you can complete everything before you start or you can reach a certain point that is useable and start and improve on it."

The Accra-Tema railway has been relaunched on January 29, 2019, by the Railway Development Ministry. The relaunched is expected to ease traffic on the roads and boost economic activities in the sector.

Railway Development Minister, Joe Ghartey speaking at the relaunch in Accra has expressed relief and excitement at the progress the sector is making under his leadership.

He says the sector has taken off and Ghanaians are going to see massive development in the coming days.

According to him, most of the work seen in the sector was done by the railway workers themselves.

“Our own people put the rail line together all by themselves. This is not to say we do not need help but I am happy to say our men did this. The Accra Tema rail was not operating when we took over office. There was some derailment some time back and that was why we had to close the railway. By God’s Grace, we’ve done a bit of work and the fruits are showing. The rail sector is a difficult one if you ask me.”