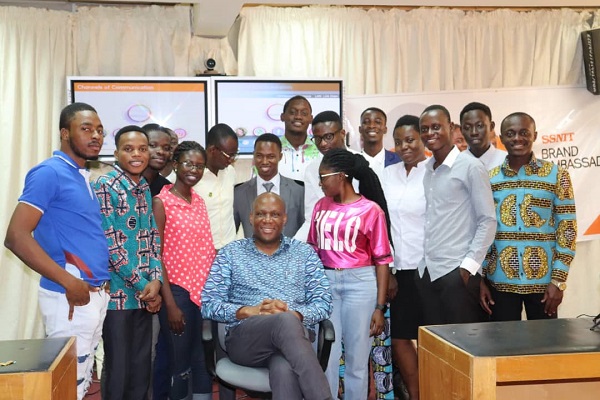 The Management of Social Security and National Insurance Trust (SSNIT) as part of its efforts to build a social security-conscious generation, has commenced the training of students as brand ambassadors on selected university campuses.

The maiden program took place at the Navrongo campus of the University for Development Studies (UDS).

The SSNIT Brand Ambassador training is meant to equip selected students on various university campuses with adequate knowledge about the basic social security scheme so they can act as peer educators on their various campuses of study and within their communities. This aimed at consolidating the gains made at the SSNIT Infoshop through continuous engagement at the peer level.

The SSNIT Infoshop is being organized by the Trust in collaboration with the University Students Association of Ghana (USAG) and has so far been held at eight university campuses across the country. It is an information-sharing platform to educate students on their rights to and the importance of social security and the need to start contributing early.

The forum, which was held on the UDS, Navrongo Campus on April 6, 2019, on the theme â€œSSNIT! Your security for tomorrowâ€, was attended by over 1,000 students. This was addressed by the principal of the campus, Professor Albert Luguterah and the Director-General of SSNIT, Dr. John Ofori-Tenkorang among others

Speaking at the SSNIT Brand Ambassador training program, Professor Luguterah lauded the Trust for their conscious effort to educate the students beyond the Infoshop campaign and implored students to be mindful of their short-term youthfulness and prepare adequately for their working life which he added would begin sooner than they thought. He expressed his delight for the event being held at the UDS, Narongo campus. â€œI am happy this programme is taking place here because I want graduates from this campus to be holistically trained for national developmentâ€. He said.

The head of External Communications at the Public Affairs Department of SSNIT, Mr. Charles Akwei Garshong trained the students on how to register to be a member of the Scheme, some investments the Trust has made, the various types of benefits and the conditions under which a contributor qualifies to receive any of the benefits. The participants were later taken through practical sessions on how to calculate pensions under the National Pensions Act, Act 766.

He explained to the ambassadors that contrary to what people thought, the amount paid as pensions entirely depends on the workers. â€œThe salaries on which you contribute and number of months or years you contribute determine what you receive as pension. The formula is predetermined so the higher your salary and the longer the period of contribution, the better your pensionâ€.

The participants were taken through their ambassadorial roles and how they should conduct themselves whilst they remain ambassadors of the Trust.

Earlier, Dr. Ohene Boansi, the vice dean of students, in welcoming the team from SSNIT to the campus, expressed his gratitude for SSNIT choosing the campus for its ambassadorial program.

Mr. Raymond Korbla Otivi later expressed confidence in his team and promised that they would take up the challenge and represent the brand to the best of their ability. The ambassadors later spoke on their role and the benefits of the scheme with the university community on Radio FAS, a campus based radio station.

The next SSNIT Brand Ambassador training program takes place at the University of Energy and Natural Resources Campus in Sunyani.