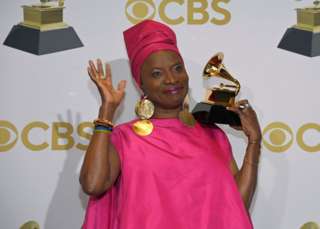 In her acceptance speech, she paid tribute to Africa's new generation of artists who she said would take the world by storm.

It was his first ever Grammy award.

He accepted the award alongside his eldest son, Esona.

"I want to thank God for the gift of music and being able to share it with the world and heal souls and help people go through whatever they're going through in life," he said.