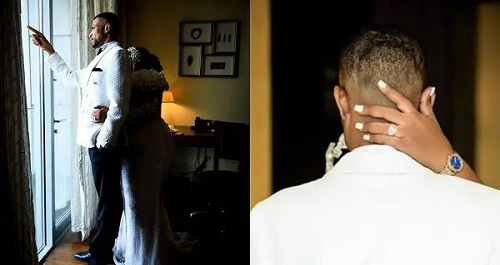 Kofi Adoma’s wife, Mrs Miracle Adoma, is dominating the news because of a testimony he shared.

According to the radio presenter, he put his wife through despicable things, but she never gave up on him.

Recounting their love journey that started some 19 years ago, Kofi Adoma disclosed that he met his wife’s father on the streets as a hustling young man. Miracle’s father then proceeded to sponsor and take him under his wing; that was how he met Miracle.

Fast forward, he impregnated Miracle, which made his benefactor very angry. For this Miracle’s father refused to have them get married.

“So I was advised to find a way to do something traditionally. So I spoke to her grandparents, and they said it was the right thing because no matter what, one day, my child will come looking for his father (me).”

Kofi Adoma continued that after the pregnancy saga and his disappearing act, Miracle’s father still pulled strings for his work in Accra. And he still messed up.

“I was working in HotFM when another lady came my way. I impregnated her. Then I told Miracle (his wife) since I was building a life in Accra with her help. She said it’s not your fault. It’s my father who won’t allow us to get married. So she gave me money to go and perform introductory rites for this other woman in Ho.

“I also took money from her to live with another woman in the room she paid for. Then, she went to see an estate company who contacted me (I was at Adom FM) that they are selling some houses. I told them I couldn’t afford it. They said the woman who directed us here has already paid half of a house for you to complete it. I went to the UK. Impregnated someone else and had another child. In all that, she was still with me.”