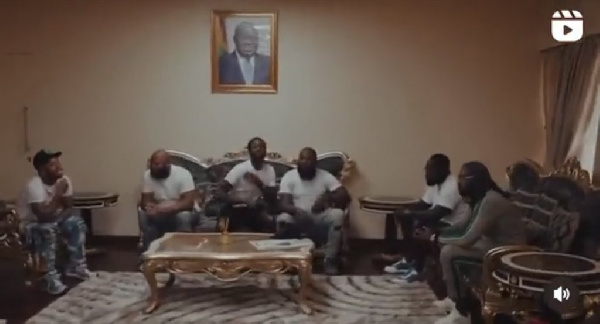 Following the uproar by some Ghanaians on social media, Meek Mill has deleted the video he shot at Ghana’s Jubilee House when he visited the country.

The American rapper in the late hours of Sunday, January 8, 2023, got a majority of Ghanaian social media users infuriated when he shared a snippet of a freestyle video he shot at Ghana’s seat of government on his Instagram reels.

The snippet, which was about 46 seconds long, was shared with the caption: “NOT INDUSTRY POWERED” we make the narrative GHANAAAAAAA🇬🇭🇬🇭🇬🇭 I felt like a king there!! “All real footage” “power rap”@nick_papz @fridayy at the “presidential villa”

Others have questioned whether this means that Ghanaian musicians can now pick up their cameras and head to the Jubilee House for a video shoot because the floodgates appear to have been opened.

Well, as things stand now, the office of the president has not reacted to all these backlash and questions yet.

The American rapper was in Ghana in December 2022 for the Afro Nation music concert, where he mounted the stage on December 29 and entertained the numerous people who gathered at the event grounds.

Check out some mixed reactions on social media

Meek Mill really shot a music video at Jubilee House?😱 This is the lowest point we can get as a country

What happened to “Jubilee House is a security zone”🤷🏿 Even American Embassy in Ghana, you can’t take pictures and Ghana 🇬🇭 allows Jubilee House to become studio.We are FINISH pic.twitter.com/IddMo26j30

How is this a problem. No security was breached over here. The White House and some other presidential houses have been in videos. There are places accessible to the public and you wil need permission to do any shoot even with your phone. I believe permission was sort to do so.

Meek Mill shot a music video at the Jubilee House & no one is talking about this kind of disrespect 😏😏 pic.twitter.com/fZV2yN8ZVT

This video of @MeekMill at the Jubilee House, Ghana's presidency is irking many Ghanaians.

Creatives would embark on personal projects to shoot photos/videos at some of our national landmarks and they’re being harassed to the extent of being brutalized by some members of our security agencies stationed there.

There’s a WHOLE MUSIC VIDEO SHOT AT THE JUBILEE HOUSE!