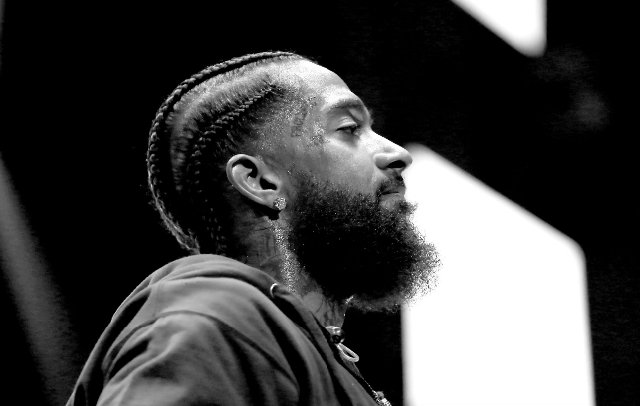 Police have named a suspect in the murder of Los Angeles rapper Nipsey Hussle, hours after a stampede at a vigil injured at least 19 people.

Authorities say Eric Holder is the man wanted in connection with the shooting on Sunday, which was ruled a homicide.

Most people suffered "trample injuries" at Monday's vigil, a fire official said, as crowds tried to rush away.

One of those critically injured suffered "penetrating, traumatic injury with cause unknown".

Police earlier asked for people to "disperse from the immediate area" and moved in to restore order, reportedly using riot gear and forming containment lines.

Reports of shots fired at the vigil "do not appear to be accurate", the police tweeted.

Nipsey Hussle was shot dead outside his clothing shop on Sunday. Two other people were wounded.

Tributes have poured in for the 33-year-old, whose debut album Victory Lap was nominated for best rap album at this year's Grammy Awards.

Tributes to murdered rapper Nipsey Hussle
Hussle, real name Ermias Davidson Asghedom, grew up in south Los Angeles and was a member of the Rollin' 60s street gang as a teenager.

He later became a community organiser, and was involved with the Destination Crenshaw arts project.

"I grew up in gang culture," he told the Los Angeles Times in a 2018 interview. "We dealt with death, with murder. It was like living in a war zone, where people die on these blocks and everybody is a little bit immune to it."

Earlier on Sunday, he had tweeted: "Having strong enemies is a blessing."