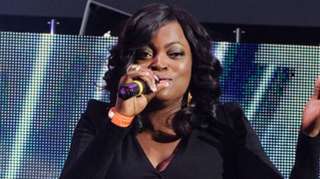 Popular Nollywood actress Funke Akindele is trending in Nigeria after announcing that she is entering politics.

Ms Akindele said she is running as the People's Democratic Party (PDP) candidate for deputy governor of Lagos.

The actress's big break came more than 10 years ago when she starred in hit film Jenifa. She has since starred in several blockbusters.

Some people online are supporting her, but others are pointing out that she may not be taken seriously because she comes from the world of entertainment.