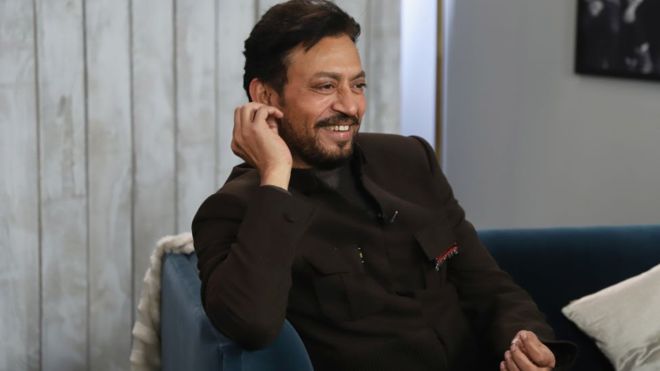 Bollywood actor Irrfan Khan, known internationally for roles in Slumdog Millionaire and Jurassic World, has died at the age of 53.

Khan was known for his nuanced and understated performances, with many calling him one of India's most talented actors.

He was so highly respected, director Wes Anderson once wrote him a part just so he could work with him.

In 2018, the actor revealed he had an endocrine tumour, a rare illness.

He later underwent treatment in a London hospital for the illness which affects cells that release hormones into the bloodstream.

Bollywood stars and politicians have rushed to pay tribute to him on social media.

"An incredible talent... a gracious colleague... a prolific contributor to the World of Cinema... left us too soon... creating a huge vacuum," superstar actor Amitabh Bachchan who worked with him in Piku tweeted.

Actor Raveena Tandon tweeted that he was a "fantastic co-star, an actor par excellence, and a beautiful human being".

Khan moved seamlessly from Bollywood to theatre to Hollywood action and art house.

In 2013, he won India's National Film Award for his leading role in Paan Singh Tomar, a biopic about a top athlete who becomes a bandit.

Other Bollywood hits he acted in including Lunchbox, Piku, and Hindi Medium. His latest, Angrezi Medium, was released just last month.

His international breakthrough came in the British-Indian film The Warrior by director Asif Kapadia which won a Bafta.

It was also shortlisted for the UK's official entry for the Academy Awards but had to be dropped on the technicality that Hindi was not a language indigenous to Britain.

The critical success of the movie launched his film career and for the next two decades he would make as many as five or six movies a year.

He kept in touch with Mira Nair - who had spotted his talent at drama school but cut him from Salaam Bombay. They would go on to make The Namesake in 2006 and New York, I Love You in 2010.

Michael Winterbottom cast him as a Pakistani police captain in A Mighty Heart and Wes Anderson wrote a small role for him in The Darjeeling Limited - just so he could work with him.

Two months after Khan went public with his diagnosis, he wrote an open letter about his experience with the cancer treatment, reflecting on the "intensity" of his pain and the "uncertainty" of life.

It drew a massive outpouring of support from his fans around the world.

The statement released by his PR company confirming his death said, "surrounded by his love, his family for whom he most cared about, he left for heaven abode, leaving behind truly a legacy of his own. We all pray and hope that he is at peace".

He had been admitted to hospital with a colon infection.

Irrfan Khan's untimely demise is the biggest loss to Indian cinema since the death of Smita Patil, one of the country's most promising actors, in 1986.

Like Patil, Khan was a protean actor, excelling in a wide range of roles and straddling diverse genres in mainstream and art-house cinema.

Khan was a successful outlier in Bollywood, known for its hammy filmmaking. He was a quintessentially understated actor - underlined in his brilliant performance as a loner in The Lunchbox - with unforced grace.

I still remember a brief meeting in a hotel lobby in the city of Agra where he was shooting The Namesake for Mira Nair, a cloying, moving tale of newly-immigrated Bengali couple in the US.

I told him he looked every bit of a Bengali bespectacled professor from the seventies, the role he was playing in the film. He smiled shyly.