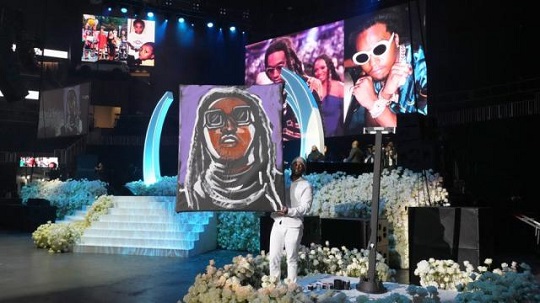 Thousands of fans have paid their final respects to the Migos rapper Takeoff at a star-studded memorial service in Atlanta, Georgia.

Stars including Drake, Justin Bieber and Chloe Bailey were all reported to be in attendance at Friday's "celebration of life" ceremony.

The 28-year-old musician died in a shooting at a bowling alley in Houston, Texas earlier this month.

Police are still investigating and have made no arrests.

Fans braved the rain to attend the roughly three-hour event at the State Farm Arena, a 21,000-capacity stadium.

Relatives - including the two surviving members of Migos, his uncle Quavo and his cousin Offset - led with heartfelt tributes to the young artist.

No media was allowed inside the venue, and phones and recording devices were also banned.

But in images and videos leaked on social media, Drake and others were shown making heartfelt speeches.

Following the event, a motorcade was seen carrying Takeoff's body to its final resting place.

The rapper was killed on 1 November by a stray bullet after an altercation broke out at a private party he was attending in Houston.

Police Chief Troy Finner, who has said at least 40 eye-witnesses may have been in attendance, has pleaded with the community to provide information.