#VGMA20 : Police allegedly arrest Stonebwoy for pulling out a gun 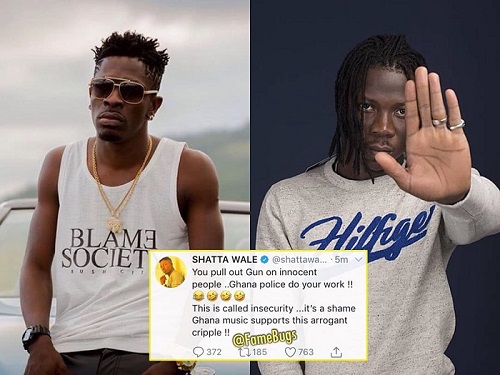 Police arrest Stonebwoy for pulling out a gun

Following the recent incidence at the 2019 Vodafone Ghana Music Awards, dancehall artiste Stonebowy has allegedly been arrested by the Police for pulling out a gun.

According to reports, Shatta Wale after leaving the auditorium took to his Twitter page to call on Ghana Police to arrest Stonebwoy for threatening him with a gun and other innocent people at the event.

You pull out Gun on innocent people ..Ghana police do your work !!
????
This is called insecurity ...it’s a shame Ghana music supports this arrogant cripple !!

If ghana police no collect your gun because of your trigger happy life ,I swear I will comot gun anywhere I see u and even if they cease my gun for doing that I will show you I have more guns ..Cuz you didn’t  only threatened my life but the lives of people ...

Imagine as you commot ,I commot ,what you feel say you cause.cuz I was told by the Law that until someone threatens to kill me with gun  ,I should not take mine out ...Ghana police do your work well I beg waaa cuz now sef people come give warning shots around my house

You no get leg to run but you are causing panic in public and everybody go run leave u if that shit happens ..Even you manager won’t stand by u ...he will run ??‍♀️??‍♀️??‍♀️??‍♀️??‍♀️

Below is a video of Stonebwoy's arrest, even though it has not been confirmed by the Police.

Why shld dey arrest @stonebwoyb ? What at all has dis boy done? Iron boy and showboy fights started small like dis and now one is dead and one is in prison... what country are we living in?? From today....ya'll must stay out from fan thing n leader ooooo.... dis boy went for his award in peace but cux of greediness of some people....u mess up his life... HIS MOTHER'S GHOST IS WATCHING U ALL ...GOODNITE. .. U WILL REAP WAT U SOW.