Will Smith responds to 10-year Oscar ban after slap 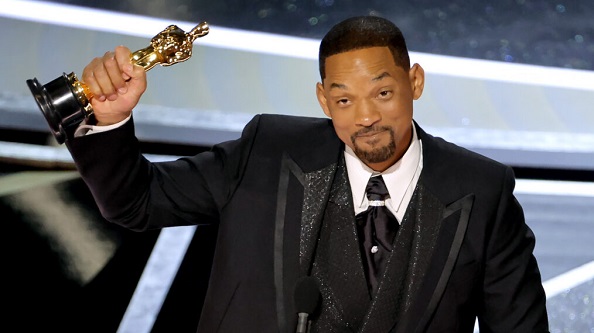 Will Smith has responded to the Academy’s decision to ban him from events for a decade.

“I accept and respect the Academy’s decision,” he said in a brief statement to Page Six on Friday.

Smith’s response came minutes after the Academy of Motion Picture Arts and Sciences announced that it was banning him from all of the organization’s events for 10 years for slapping Chris Rock at the 2022 Oscars.

“The Board of Governors has decided, for a period of 10 years, from April 8, 2022, Mr. Smith shall not be permitted to attend any Academy events or programs in person or virtually, including but not limited to the Academy Awards,” the Academy said Friday.

The statement continued, “We want to express our deep gratitude to Mr. Rock for maintaining his composure under extraordinary circumstances. We also want to thank our hosts, nominees, presenters and winners for their poise and grace during our telecast.”

READ ALSO: Will Smith banned from Oscars for 10 years

The actor, 53, will keep the Oscar he won this year for his role in “King Richard.”

Last week, Smith announced he was resigning from the Academy, meaning he could not vote but was still able to be nominated and attend the awards show.

“My actions at the 94th Academy Awards presentation were shocking, painful, and inexcusable,” he said at the time. “The list of those I have hurt is long and includes Chris, his family, many of my dear friends and loved ones, all those in attendance, and global audiences at home.”

Smith shocked the world when he slapped Rock, 57, across the face on March 27 after the comedian made a joke about Jada Pinkett Smith’s shaved head. The “Girls Trip” actress, 50, struggles with alopecia, a condition that causes hair loss.

READ ALSO: Will Smith resigns from Oscars Academy over slap

While Smith did not apologize to Rock while accepting his Oscar, he did issue a statement on Instagram nearly 24 hours after the ceremony, writing, “Violence in all of its forms is poisonous and destructive. My behavior at last night’s Academy Awards was unacceptable and inexcusable.”

He added, “Jokes at my expense are a part of the job, but a joke about my Jada’s medical condition was too much for me to bear and I reacted emotionally.

“I would like to publicly apologize to you, Chris. I was out of line and I was wrong. I am embarrassed and my actions were not indicative of the man I want to be. There is no place for violence in a world of love and kindness.”

Rock decided not to press charges and has yet to formally address the matter.