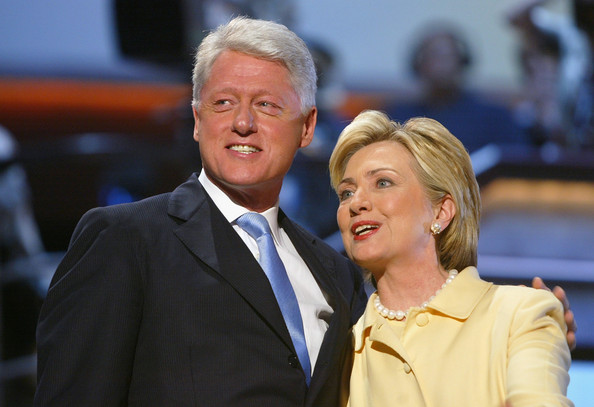 The most frequent argument used to bully Bernie Sanders supporters into voting for Hillary Clinton, instead of voting for third party candidates like Jill Stein, is that voting your conscience is a “privilege” that only white people can afford to take.

However, the data is clear that the last time a Clinton was in the White House, minorities were jailed at higher rates than during any of Clinton’s predecessors, with 673,000 new inmates in state and federal prisons. Black poverty and unemployment rates also skyrocketed during the Clinton years. As Ohio State University law professor and acclaimed author Michelle Alexander wrote in The Root, Clinton’s presidency ushered in the mass incarceration epidemic:

“Human Rights Watch reported that in seven states, African Americans constituted 80 to 90 percent of all drug offenders sent to prison, even though they were no more likely than whites to use or sell illegal drugs. Prison admissions for drug offenses reached a level in 2000 for African Americans more than 26 times the level in 1983. All of the presidents since 1980 have contributed to mass incarceration, but as Equal Justice Initiative founder Bryan Stevenson recently observed, ‘President Clinton’s tenure was the worst.’”

During a recent Black Lives Matter march in Philadelphia on the second day of the Democratic National Convention, thousands of black protesters were seen chanting, “Don’t vote for Hillary! She’s killing black people!”

Bill Clinton’s troubling history with the black community goes all the way back to his days as Governor of Arkansas, when he signed a bill into law that proclaimed one of the stars in the Arkansas flag was in honor of the Confederacy, which was built upon the brutal practice of slavery. And throughout his tenure as Attorney General and Governor of Arkansas, Clinton never once went on record opposing any of Arkansas’ multiple holidays celebrating the Confederacy, from Confederate Flag Day, Confederate Memorial Day, or Confederate History and Heritage Month.

While running for president as the “tough on crime” Democratic candidate in 1992, Clinton made the decision to execute African-American inmate Ricky Ray Rector heading into the all-important New Hampshire primary and Iowa caucus. As Yale professor Stephen Bright wrote in a 2014 report on capital punishment, the man slated for execution by then-Governor Clinton was so mentally ill that he saved a portion of his last meal for later. One of the guards commented “[Rector] thinks he’ll be back in his cell on Saturday morning.”

By the time Bill Clinton secured the Democratic nomination in the summer of 1992, the Democratic Party had just passed a platform completely devoid of language addressing the need for racial justice for the first time in over 50 years. Clinton co-authored a book with running mate Al Gore called Putting People First, which only mentions race once in regard to eliminating racial hiring quotas for federal positions.

Rapper Sister Souljah, who was a frequent guest MC with Hip-Hop group Public Enemy, criticized Clinton’s white supremacist background and policies while Clinton was on the campaign trail, and the Arkansas governor responded by comparing the black social justice activist to former KKK leader David Duke while addressing the Rainbow Coalition. Souljah hasn’t forgotten that moment, and as recently as November 2015, referred to Hillary Clinton as “[T]he slave plantation white wife of the white ‘Master.’”

During Bill Clinton’s first term as president, he laid the foundations for what would become, by his own admission, a nationwide epidemic of mass incarceration in the 1994 crime bill. Clinton’s crime bill funded federal prisons by an additional $9.7 billion and created the infamous “three strikes” provision, among other provisions aimed at cracking down on crime with extreme measures and massive funding increases for policing.

Clinton also repealed large swaths of the Glass-Steagall Act in 1999, which then allowed big banks to consolidate operations and created the conditions that led to the subprime mortgage crisis of 2008.

After the deregulation contained in the Financial Services and Modernization Act Clinton was signed into law in the seventh year of his presidency, big banks suddenly had the freedom to create risky financial instruments, like derivatives and credit default swaps, allowing big banks to write complex mortgages to families they knew would not be able to normally qualify for or get out of.

As the New York Times reported, this happened mostly in predominantly black communities, like Baltimore, where Wells Fargo referred to subprime customers as “mud people” and the subprime mortgages themselves as “ghetto loans.” Over half of Baltimore homes in foreclosure by Wells Fargo are vacant, and 71 percent of those vacant buildings are in predominantly black neighborhoods. About half of black wealth as a whole was lost across the nation as a result of the financial crisis.

Even though Bill Clinton’s administration was almost two decades ago, Hillary Clinton still stands by her husband’s policies and administration, promising supporters earlier in the campaign season that her husband would serve as a top economic adviser in her administration.

Even though the former head of state has had decades to apologize for the damage his policies inflicted on black communities, Clinton was heckled at his last public appearance in Philadelphia, where he got into a shouting match with Black Lives Matter activists. Clinton accused the activists of sympathizing with gang members and murderers, saying, “you’re defending the people who killed the lives you say matter” while defending the 1994 crime bill.