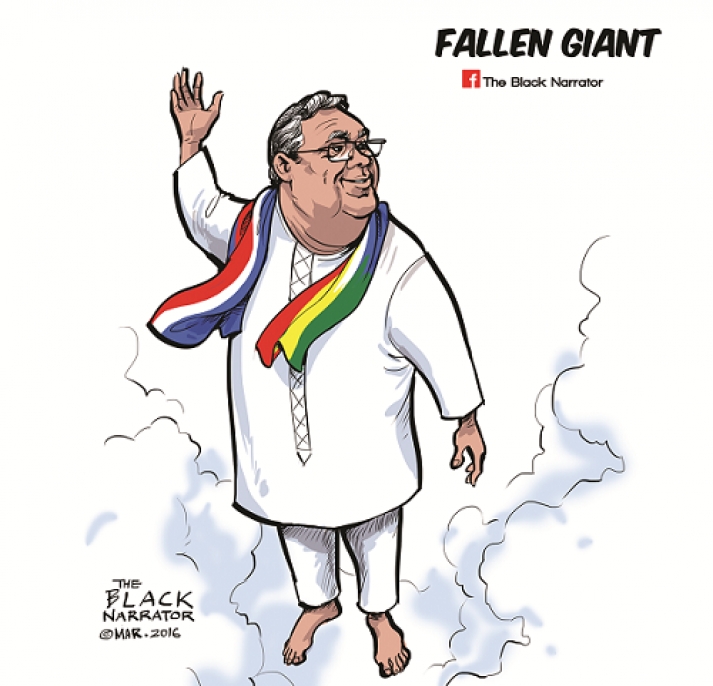 Both of us could never really agree on when we first met, but I suspect circa 1967 would be a fair date. Maybe the meeting was from afar.

Jake Otanka Obetsebi-Lamptey was at the time the young, dashing, suave film star and smooth continuity voice on Ghana Television. He played the role of Dr Minta in the television series of that name.

I was straight from school and finding a job with the Daily Graphic. I am a year older than him and this had special significance in my scheme of things.

These days it will probably be said we were both in the media, but I am not sure we defined it as such. We do agree on a story that sticks in our minds. I reported in the Sunday Mirror, as it was then called, on a press conference by E.H. Boohene who had been asked to stand aside from his position as Managing Director of Ghana Airways. Jake called me to say he liked my “refreshing use of the English language”.

Next heard of, he was in advertising and he was climbing the corporate ladder very fast. Whenever and wherever we met, we took up from wherever we had left off on the last occasion. We asked no questions about what each other had been up to.

Then we came to live quite near each other, Cantoments and North Labone, and I got drawn into his circle of friends. Various advertising campaigns became the language of conversation. The KBL (Kumasi Brewery Limited) calendar was always a highlight; that is where the beautiful and attractive young girls hoped to be featured and served as a platform for many aspiring models.

The campaigns for the Family Planning programme were memorable and he made a name for himself in advertising. I have no idea how he decided on advertising but it fitted him like a second skin.

Much later on in my life, I came to the conclusion, in a very roundabout way that what a person became in life often bore no relationship to how he performed at school, or often how much schooling he had. Jake did not go to university but he was better read than many who did. He used to read lots of “How to” books but his favourite genre were biographies, which he read avidly. If he borrowed your book, he would return it after reading and there would be a discussion on what he found interesting.

Our children were contemporaries and became friends, Mickey, Atu, Koranteng, and his Charis. He preferred to be visited than to visit. He ran an open house; you would always find a cold beer, most probably a Gulder in the Obetsebi-Lamptey house. During those times of shortages in Ghana, the availability of a cold beer certainly made the house at Fourth Circular Road attractive.

But the attraction went far beyond booze and food. The conversations ranged over a wide selection of topics because his range of friends was omnivorous.

There were the lawyers, army officers, childhood friends, engineers, journalists, diplomats, civil servants, etc.etc. And then of course, he was a great one for picking strays, many of whom stayed as lifelong friends.

Sometimes it was not clear to me how he managed some of these relationships since he was hopeless at any of the Ghanaian languages.

Then Charlene died. Jake’s wife Charlene, his elegant, sophisticated soulmate died. We were young, death was not supposed to be part of our narrative, but Charlene died and suddenly the urbane unflappable host looked extremely vulnerable. Everybody rallied, Ninii, Miguel, George, Nikai, Ophe, Sati, Nancy, Angela, his sister Naa Ayele, his in-law Anna, all his many friends, and somehow he pulled through.

I got a scoop for the Daily Graphic about the inside story of the Liberia coup d’etat staged by Master Sergeant Doe, when his house suddenly became a refuge for his many Liberian friends who had to flee from the blood-letting in their country. He married Jeannette and Charis got a sister, Rachael.

At which point do I bring in politics? Of course he was the son of Emmanuel Obetsebi-Lamptey, one of the Big Six. But that is not what defined his politics. He could not come to terms with the manner of his father’s death, the vehemence with which political opponents were treated during the First Republic.

This outsize man, this man who doubled the ubiquitous plastic chair to cope with his weight, detested violence. But then, of course, he believed he could charm everybody over to his point of view with the sheer force of his personality. This, after all, is the man who convinced the whole of Ghana that there was something magical and special about Key soap.

There cannot be many people, alive or dead, who have worked longer, harder and with more commitment to the NPP political tradition than Otanka Obetsebi-Lamptey, It gives me a lot of satisfaction that I once told him he had done more for the tradition than his father did, a member of the Big Six, though he was.

The December 31, 1981 coup d’etat disbanded our group. Things were certainly topsy-turvy. Our friends had staged the coup d’etat, we disagreed with the overthrow of the elected government. Those who had been overthrown became the big supporters and beneficiaries of the coup and those who were in opposition ended up in exile.

We did not see very much of each other during the 19 years that I spent in exile but I was here when the customary rites were performed for Charis’ marriage.

When I did get back in July 2000, it was a seamless reunion. The campaign to elect Candidate Kufuor as president was in progress and campaign manager Jake simply set me to work. His house was a hive of activity and studios erupted on his garden for adverts to be recorded.

I was pleasantly surprised to discover that my very urban friend Otanka had been transformed into a very rounded Ghanaian. He knew about all the many and various Likpe towns in the Volta Region, he knew about little villages in the remotest parts of the country. I inherited two friends of his from Nima. He still couldn’t speak any Ghanaian language and a concerted effort by Esther, his wife, to turn him into a Ga speaker was not very successful.

He was supportive when in 2004, I embarked upon my doomed enterprise to get elected to Parliament and Esther tracked me down to a little hamlet in the constituency that did not have a road. The villagers did not vote for me but they still recount the day Jake Obetsebi-Lamptey’s wife came to their village! I did not support his doomed enterprise to get elected as the NPP flag bearer in 2007, but we agreed to disagree.

We have a lot of unfinished business. The last time we spoke, he wanted to know when l would finish work on a draft paper he had given me. Some around him were very wounded by his dramatic rejection by the party in the Tamale congress. But he was still working on plans for party reforms. I also have an outstanding invitation.