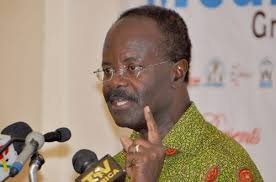 That Mother Ghana needs rescuing from the clutches of the NDC/NPP duopoly is beyond doubt.

Their intense rivalry is gradually destroying our homeland Ghana. It is turning the lives of millions upside down - as the sabotaging of the national economy (as part of a scorched-earth political strategy to win power for the main opposition party) takes its toll on society.Today, even members of the super-wealthy criminal syndicates committing serious crimes (mostly white-collar crimes ripping off Mother Ghana in sundry public procurement deals) - as a regular business using special-purpose legal fronts - now deem it wise to hide behind the two political parties that make up the NDC/NPP duopoly in order to escape justice.Clearly, we are at a juncture in our country's history, when Mother Ghana desperately needs a credible third-force in our nation's politics.That third-force ought to govern the country after 7th January, 2017, at the head of a government of national unity, made up of the nation's best brains (irrespective of the appointed individual's political affiliation): if our country is to move ahead again.The sad truth is that our homeland Ghana will continue to mark time if the National Democratic Congress (NDC) and the New Patriotic Party (NPP) continue to dominate our nation - and political power continues to be alternated between those two opaque and corrupt political parties in the governance of our country.The question is: Why are the hard-pressed people of Ghana wasting precious time tolerating the NDC/NPP duopoly - when there is not a single nation anywhere in the world that has become prosperous, which prior to that economic transformation taking place, had been a polarised society riven by party politics.No modern nation today can possibly prosper if it remains a deeply divided society.Yet that is precisly what Ghanaians are apparently hoping will happen to their much-divided nation - if they vote for either of the presidential candidates of the constituent parties that make up the NDC/NPP duopoly that have ruled Ghana since the 4th Republic came into being. Some hope.Is this not a modern African nation full of intelligent individuals? Yes, it is indeed. So why are so many Ghanaians determined to ruin their collective future by continuing to blindly support the presidential candidates of the divisive NDC/NPP duopoly - when they know that Ghanaians need to be unified in order to successfully move the nation forward ?Is it not obvious to the younger generation of educated Ghanaians yet that whichever of the two parties that make up that corrupt and super-ruthless NDC/NPP duopoly, which will find itself in the political wilderness after this December's presidential election, will resort to actively sabotaging the nation-building effort: as sure as day follows night?Is that not what the extremists and hardliners in the NPP have been engaged in since they lost power in the December 2008 presidential and parliamentary elections?The negativity of the nonsensical "my-party-my-tribe-right-or-wrong" political philosophy that so many hold in this country must be jettisoned quickly if Ghana is to be put in a position to be able to move ahead rapidly again.If Ghanaians make the fatal mistake of voting for either President John Dramani Mahama or Nana Addo Danquah Akufo-Addo, Ghana's economy will continue to deteriorate: because both political parties that make up the NDC/NPP duopoly are beholden to the selfsame vested interests that are draining our nation of its very lifeblood through high-level corruption.The two parties are in effect special-purpose vehicles used by Ghana's vampire-elites that are the local lackeys of the foreign carpetbaggers ripping our nation off in those sundry one-sided agreements signed by our leaders over the years - terrible agreements that have legalised the mortgaging of the younger generation's future well-being.For once Ghanaians need to put aside blind allegiance to the NDC/NPP duopoly.The most educated amongst the younger generation of Ghanaians ought to understand clearly that a divided nation can never progress and prosper - not when the main opposition party will actively sabotage the nation-building effort whiles in the political wilderness after January 2017: so as to make the governing party unpopular and help it win power in the 2020 presidential and parliamentary elections.The only hope for Ghana would be victory for the presidential candidate of a united new Convention People's Party (CPP).The followers of Osagyefo Dr. Kwame Nkrumah should stop claiming to be Nkrumahists if in the face of all the evidence of the suffering the masses of the Ghanaian people are undergoing, today, they still don't understand why they need to unite under the banner of the Convention People's Party (CPP) and select Dr. Paa Kwesi Nduom as their presidential candidate with Dr. Edward Mahama as his running mate.Do they not still realise that Nkrumah's Ghana needs rescuing from the clutches of the NDC/NPP duopoly - today's neo-liberal tools of neocolonialism and imperialism? Haaba.The time has now come for all Nkrumahist politicians to put aside personal ambition and narrow-minded partisanship, and unite around the leadership of Dr. Paa Kwesi Nduom and Dr. Edward Mahama in a united new CPP - which will lead the transformation of Ghana into an African equivalent of the egalitarian societies of Scandinavia: after emerging victorious in the December 2016 presidential election.Genuine Nkrumahists must outhink and outsmart the determined agents of neocolonialism and imperialism who have stopped the Nkrumahist front from reuniting under the banner of the CPP for decades now - and finally reunite and win power again to move Nkrumah's Ghana forward once again.For Mother Ghana's sake Nkrumahists must unite around the candidacy of a Dr. Paa Kwesi Nduom-Dr. Edward Mahama presidential ticket.