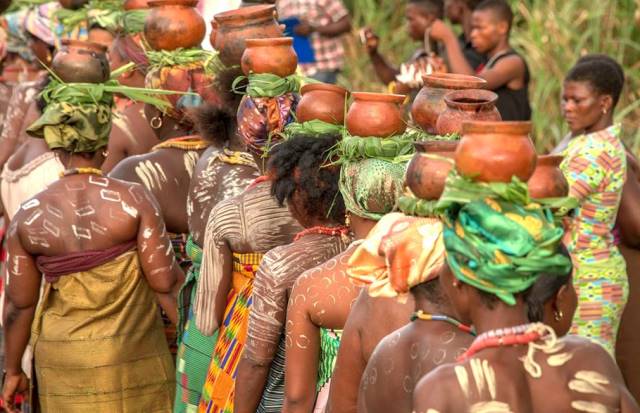 Let us enjoy the interesting Anlo-Ewe migration story from Tado and Notsie to the present-day Ghana and how their Anlo kingship system came to be rotated between the Bate clan and Adzovia clan. This is the story as told by renowned Ewe folkloric writer and educationist, Rev. F. K. Fiawoo:

“At Tado the Anlo leader was a hunter named Wenya. When the King of Tado was inhospitable and threatened to evict the Anlo, Wenya came to the rescue and arranged a marriage between his sister and the King, whose name was Adzasimadzi. This marriage pleased the King greatly and after a while Wenya’ s sister gave birth to a son, whose name was Kponoe. When Kponoe was a young man he was very popular and Adzasimadzi designated him heir to the stool (throne) of Tado. Because of this the Anlo were happy and contented, enjoying the esteem and respect of the people of Tado.

Kponoe then seized the stool and gave it to his uncle, Wenya, thereby preventing it from falling into the hands of his half-brothers, Ahafia and Gba Akoli. When the loss of the stool was discovered, the wrath of the people of Tado became so great that Kponoe, Wenya and the Anlo people fled with the stool to a place called Notsie.

At Notsie, Wenya proclaimed Kponoe King of the Anlo. The King of Notsie, who was called Agokoli, was friendly toward them and protected them from the people of Tado, who were still anxious to recover the stool. One day, however, Agokoli died and he was succeeded by his son, Agokoli II. The new King hated the Anlo and did everything possible to make them miserable. It happened that one day the son of Agokoli II killed the son of Kponoe without cause. According to the custom the Anlo demanded the head of the murderer in vengeance and this was granted.

Unknown to Agokoli II, Kponoe’ s son had been restored to life by skilful Anlo healers. When the King heard of this he was furious and he built a huge thick wall around Notsie to prevent the Anlo from escaping his wrath. Having the Anlo trapped within the confines of Notsie, he was able to persecute them mercilessly. The Anlo managed to escape the wrath of Agokoli II by continuously wetting part of the wall so that it became very soft. One night, while they distracted the people of Notsie by drumming, dancing and singing, they broke through the wall. One of the old men tapped the wetted part of the wall three times with a sword. After this the young men gave a mighty push and that part of the wall crumbled before them. The Anlo then escaped through the hole in the wall.

After leaving Notsie the Anlo split up into two groups. One was led by Wenya and the other by Kponoe. Wenya led his people to Anloga by way of Atiteti, Keta, Tegbi and Woe, where settlements were founded. Kponoe led his people to Kodzi, by way of Anyako and Alakple, where settlements were founded. When he had reached Kodzi, Kponoe learned that his uncle, Wenya, was at Anloga and he hastened there to meet him. Anloga then became the capital town of the Anlo people and the permanent seat of their King.

Soon after Wenya and Kponoe were re-united at Anloga, a great famine fell upon the land and the people suffered great hardships. This was because Kponoe, in his hasty flight from Notsie, had left behind the Tado stool. This stool contained the spirits of the ancestors, the guardians of the people. The spirits of the ancestors had to be brought back to Anloga if disaster was to be averted. Wenya advised Kponoe to send his two sons, Azimehada and Fui Agbeve, to Notsie for the stool. But the mother of his two sons objected strongly to this suggestion and refused to permit them to undertake such a dangerous journey.

When Kponoe’s sisters heard of this they offered to send their own sons instead. Kponoe agreed to this and the two young men, whose names were Adeladze and Atogolo, set out for Notsie.

When they reached Notsie Agokoli II refused to part with the Tado stool unless he was brought the legs of Kponoe in vengeance for the death of his son. Adeladze and Atogolo managed to find the body of a man who was identical to Kponoe and gave this man’s legs to Agokoli II. The King was satisfied and surrendered the stool to the two young men.

When Adeladze and Atogolo returned to Anloga with the stool there was great rejoicing. Kponoe was so grateful that he named Adeladze heir to the stool, although he was of the Bate clan, while Kponoe was of the Adzovi clan. In this way began the Anlo tradition of sharing the stool between these two clans.”

Fiawoo, D. K.(1958). The Influence of Contemporary Social Changes on the Magico-Religious Concepts and Organization of the Southern Ewe-Speaking Peoples of Ghana. Unpublished Ph. D. Thesis, University of Edinburgh