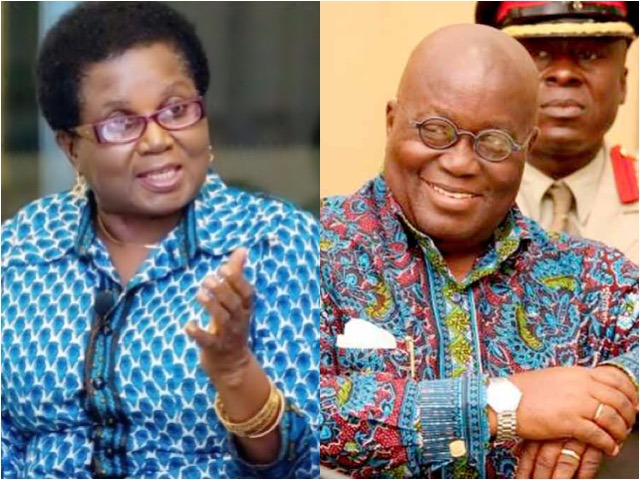 Context matters. That’s why Elizabeth Ohene decided to take on her former employers for producing what, in her view, was a poor programme on Ghana’s deteriorating press freedom. She accused the BBC of not providing context.

Elizabeth Ohene is one of the most respected names in Ghanaian journalism. Her courage in the military era continues to inspire those of us who were not born in those years and only grew up to read about her heroics.

Unfortunately, however, Elizabeth and the principles of free speech and accountability which defined her now appear miles apart. And one does not need to ask who moved.

In her recent letter to the BBC (which mysteriously leaked while the complaint was still being dealt with), Elizabeth Ohene stated that she had “been in government, serving as a Minister of State in Ghana from January 2001 to January 2009 and I continue to be a frontline member of the political party that is currently in power”.

It is, therefore, to say Elizabeth Ohene is also a politician.

Not long ago, she took on civil society organisations in Ghana. Their offence? They were demanding accountability and transparency on an opaque government transaction. She called them “all-knowing neutrals”.

In her criticism of the BBC, Elizabeth Ohene said, “I am very sorry to have to say that I am not impressed with your reliance on the West African Media Foundation. Unfortunately, they are no longer in my estimation, in a position to offer unbiased opinions on this government.”

What she failed to add—by way of context— is that the Media Foundation for West Africa (MFWA) remains the most credible voice on press freedom in the sub-region. In Ghana, the MFWA is the institution politicians and academics rely on for data on press freedom.

When there were any violations against journalists in the John Mahama era, the MFWA led in demanding accountability. So, when did the MFWA lose that position as a defender of freedom? Or perhaps the foundation should be singing the praise of the repressive Akufo-Addo administration, which civil society organisations and statesmen such as Sir Sam Jonah have complained about?

Is it not surprising that Elizabeth Ohene did not give a single reason to back her claim that the MFWA is biased against this government?

On the issue of context, Elizabeth Ohene proved herself guiltier than the BBC, which she accused. For instance, she said she expected the BBC producers to have spoken to the National Media Commission (NMC). But she failed to provide an important context.

The Chairman of the NMC is an appointee of President Akufo-Addo whose administration’s repression of the media the BBC was highlighting. And the NMC has generally been silent on these issues.

But that isn’t the most important context Elizabeth failed to provide while charging the BBC on context. In her complaint letter, she wrote:

“But when the BBC starts a programme that purports to be about Ghana’s free speech being under attack, with a man whose claim to fame seems to be how scurrilous he can be about his opponents, who makes no attempt to be factual and who uses the most obscene language to describe Ghana’s First Lady at every opportunity, I have to wonder about the BBC.”

Elizabeth Ohene failed to tell the BBC that President John Agyekum Kufuor repealed the Criminal Libel Law in 2001. If a journalist uses the “most obscene” language to describe the first lady, it is not a criminal matter. The first lady could have sued for defamation. But the police arrested, detained and charged him.

A week earlier, the police had arrested, detained and charged a man who had said that the president’s family members used Ghana’s presidential jet for shopping abroad. When it was pointed out to him that his information was false, the man publicly retracted and apologised, but the police still went ahead to arrest him.

This context would have shown that while the journalist using obscene language should be condemned, the state was acting in ways that criminalised free speech.

Elizabeth Ohene should have told the BBC that when the law of publishing false news was used over a decade ago, President Akufo-Addo had this to say:

“This has become particularly apparent since the government of the National Democratic Congress once more assumed office in January 2009 after winning the 2008 general elections. Bereft of the convenient tools of criminal and seditious libel laws, the ruling government has had to comb through the Criminal Code and to seize upon the offence of offensive conduct conducive to breaches of the peace and the sister offence of publishing false news likely to cause fear and alarm to the public.”

Today, that same law is used to arrest people who make pronouncements against Akufo-Addo‘s family members and Elizabeth Ohene wants us to focus on what the people said and not the criminalisation of speech.

If context was really important, Elizabeth should have reminded the BBC that the man who was arrested was not the only one who says the vilest things on the radio in Ghana. According to media ethics monitoring reports compiled by the MFWA, some of the worst pronouncements on the radio are made by radio stations owned by or affiliated with Elizabeth Ohene’s party.

A member of parliament and influential member of Elizabeth Ohene’s party once put the photograph of an undercover journalist on his Accra-based television and charged his audience that whoever met the journalist should attack him and that he (the MP) would be responsible.

Not long afterward, that journalist, Ahmed Hussein-Suale, was shot and killed by unknown gunmen and nothing has happened to the MP who issued the threats.

In 2021, that same MP, Kennedy Agyapong, issued threats against another journalist of the Multimedia Group. While there were campaigns and condemnations against his pronouncements, President Akufo-Addo appointed him as a board member of a state-owned enterprise.

If one man issues a threat against a journalist, who was later killed, and that man is free, why should Elizabeth Ohene have problems with the BBC for speaking to another man who was arrested and detained by the police for a false claim against the first lady?

The BBC, in my view, was mild. The media environment is worse than it reported. I have lived it and can speak from experience.

In the heat of the 2016 election campaign in Ghana, I published an investigative report about President John Mahama. He had received a “prohibited gift” of a Ford Expedition vehicle from a Burkinabe contractor who had won questionable government contracts in Ghana.

Before I published that story, a friend of the president had told me that they (some members of the governing party) had done their assessments and concluded that if I proceeded with the story, they would lose the election.

“If it were any journalist, we wouldn’t be worried. How much would he or she demand [to drop the story] that we cannot pay? But with you, we know nothing would make you drop it.”

It ended with a plea to hold on to the story until after the election. I declined and I knew the stakes were high.

The night after I published the story, the Communications Minister, Dr. Edward Omane Boamah, called to offer me police protection, but I declined. At the time I felt very safe. The body language of President John Mahama was that of tolerance, and not of vindictiveness. I had no reason to be afraid.

Today, the atmosphere isn’t the same. I received my first serious death threat in 2017, not long after Akufo-Addo came into office.

In 2019 and 2020 I had to leave the country temporarily due to threats against my life. The National Security Minister provided me with police escorts.

The reports of death threats I made to the police in 2017 and 2020 did not yield any results.

I am not the only victim of the worsening environment for journalists in Ghana.

Apart from the killing of Ahmed Suale, operatives of the National Security ministry arrested, detained and allegedly tortured editors of modernghana.com in 2019. They had published negative reports about the minister. Their equipment and phones were seized in the 2019 raid, and as of 2021, the gadgets had still not been returned to them.

Caleb Kudah of Citi FM, who went to film state vehicles procured and abandoned for years at the National Security premises, was arrested and assaulted by operatives. Nothing happened to those who did that to him.

These and other violations recorded under President Akufo-Addo could not have gone unnoticed by the BBC. And Elizabeth Ohene could not provide any evidence or counter facts to contradict what the BBC did.

In fact, less than a week after her publication, Reporters Without Borders has released the 2022 Press Freedom Index.

Ghana has also recorded its worst ranking on the African continent this year. The country has moved from 3rd to 10th in Africa.

If producers of the BBC programme ever thought they painted a worse picture than the reality, the context I’ve provided and the press freedom rankings should put their minds to rest.