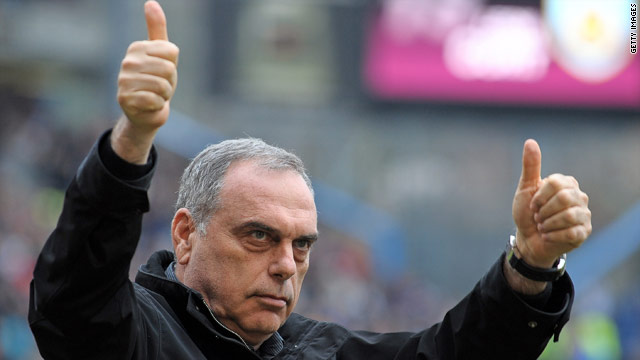 He said it with a stone cold face and then smiled wily afterwards. Boosted by victory in a Nations Cup qualifier against Mozambique at the Accra Sports Stadium, Avram Grant knew his moment to hit back at weeks of intense scrutiny had arrived and he did not miss the chance to land his comeback punch.

This country, Grant advised, should concentrate on the football, not the bull***t. We don’t know exactly what he meant by that and we probably will never know given how well the Israeli has been protected from difficult questions in recent days.

But it is obvious why he is unhappy. Fuelled by our collective rage, we hauled him back to Accra to make trips to Dawu, Tema, Obuasi and everywhere to watch league games when he would rather have been relaxing somewhere in Europe claiming to be monitoring players.

His agent Saif Rubie, whose only interest in the affairs of Ghana football is obvious also saw the moment to hit back after that 3-1  win over Mozambique. He asked to #stoptbs and told us to #foh which means f***k out of here.

Then after Nigeria’s AFCON hopes were ended by defeat in Egypt, he saw his moment to strike again, taking the ‘clueless’ Ghana media on again for thinking qualifying for AFCON is easy. He said we should check with South Africa and Nigeria.

It is a legitimate punchline. The gloating of both Grant and his agent too have all the trappings of two ignorant men with no knowledge of the history and football context of the country whose money they are happy to take and whose job they begged for.

Grant is the highest profile coach to manage Ghana and we said that happily when he took the Ghana job. He took Chelsea to the Champions League final, Portsmouth to an FA Cup final and West Ham to relegation. Before him we had trawled Serbia for coaches who gave us world cup qualification and others who thought they could walk on water without the performance to show for it.

For all that though, Grant’s two jobs before taking up the Ghana position was in Serbia and Thailand. For a man who feels like the Ghana version of Alex Fergusson and Jose Mourinho combined that must have been spectucalar.

The painful truth that Grant and his agent don’t want to hear is this: he needed Ghana as much as Ghana needed him. If they have any shred of honesty, they would happily admit that they applied for this job, lobbied for it and did all they can to get it. It is true that Ghana had been bruised at the 2014 world cup but when Grant consistently says how he saved and rescued Ghana football, he is being economical with the truth to make himself look good.

And his own decision making in the period that he has been in the Black Stars job bares that out. If that Brazil team represented everything bad about Ghana football, then it says a lot about Grant’s judgement that he has rarely tampered with it’s composition.

Apart from Michael Essien, Sulley Muntari and Kevin Prince Boateng, the core of the team that played USA, Germany and Portugal has been in place. Grant installed Razak Braimah as number one goalkeeper and played Baba Rahman as left back more. Maybe that is what he wants us to be grateful for.

And what is this bull***t that Grant and his agent have constantly referred to? Bull***t is when you draw a salary of over $40,000 and think it is okay to be absent from your duty post for more than two months. Bull***t is when it requires two letters from your employees to report back to work after your leave. Bull***t is when you claim to be monitoring players in Europe but only say it with a one photo and a visit because we begun asking questions. Bull***t is when a day after your country’s league kicks off, you are miles away on a television station discussing another league. Bulls***t is when after all those supposed monitoring, you still call up the same set of players we can all list with our eyes closed. And bulls***t is when it is news that our national coach has watched a league game because he is a demi god.

But it is not just bull***t. It is disrespect to our collective wisdom as a country. It is even worst that after he sat down to deliver that bull***t verdict others have attempted to claim it was aimed at journalists. It was not. He was talking to an entire country that dared ask that a coach who earns more than the president of this land must treat them with the seriousness his salary requires.

Maybe we also need to organise some badly needed Ghana football lessons for Grant and his agent who has become an expert in everything Ghana overnight.

Anyone who thinks that failure of Nigeria and South Africa to qualify for AFCON 2017 highlights Ghana’s achievement in qualifying is dabbling in needless self gratification.

Maybe Grant does not know these basic facts
•    Ghana has missed only one AFCON since 1992.
•    Between 2008 till now, Ghana has reached every AFCON semi final.
•    In that period too, the country has played in two finals including the one that gives Grant the wrong impression that he is the best thing to have happened to this country.
•    South Africa has barely managed to match up to Ghana in international football so can’t use their failing to highlight the ‘achievement’ of qualifying
•    And Nigeria have won two AFCONS since we last won one. They did as recently as 2013. Morale of the story; it is not just about qualifying, it is about winning.

If reminding Grant of all this bulls***t, then we will dabble in a lot of it. If telling him we don’t want a coach who goes on long holidays disguised as monitoring, then we will happily talk about that.

Kwesi Nyantekyie has done an incredible lot to position this country as a major force in African football by providing the base for regular world cup appearances and Nations Cup participation. The coaches have done well and so have many of their players.

But down to the last man, they know what this country craves. This country wants another Nations Cup title not glorious penalty defeats so it is pointless boasting about one. The players know this, the managers know this.

Grant, it seems is the last man to understand that. So he can complain all he waants. We will remind him that in the country that was coached by C.K Gyamfi and aided to global recognition recently by Ratomir Dujkovic and Milovan Rajevac, he has done nothing yet.