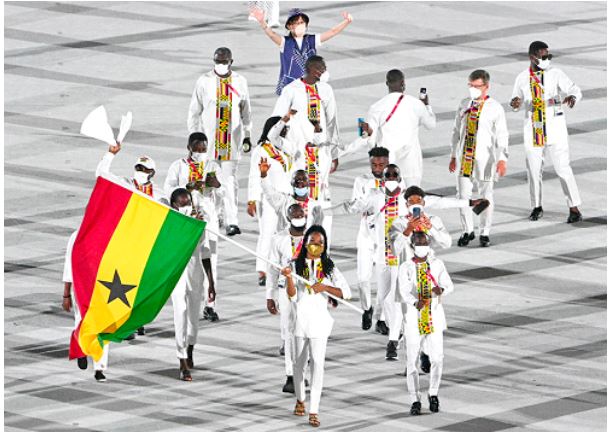 When Tokyo, Japan won the bid to host the 2020 Summer Olympic Games after the 2016 Rio de Janeiro, Brazil Olympics, no stretch of imagination could have foreseen the 2020 Tokyo Olympic Games being held without spectators.

The games were postponed from 2020 to 2021 because of COVID-19. However, â€œ2020 Olympic Gamesâ€ was maintained as the name in 2021. Indeed, until the eleventh hour, it was still not certain if the Games would be held. For the first time in Olympic history, the games are being held behind closed doors.

While the 1964 Tokyo Olympic Games generated excitement among thousands of cheering Japanese spectators, Tokyo 2020 had less than 1000 spectators in the 60,000 capacity stadium. A Japanese interviewed described the opening ceremony as â€œsurrealâ€ as it was done in an empty stadium.

On July 23, 2021, Emperor Naruhito opened the Games with Japanese tennis star, Naomi Osaka, lighting the cauldron with the Olympic flame.

Â For the first time in 49 years, there was a one-minute silence held in honour of the 11 Israeli athletes who were murdered by members of the Black September Movement of the Palestine Liberation Organisation (PLO) at the Olympic Village during the 1972 Munich, West Germany Olympics.

As the opening ceremony took place, protests were held outside the stadium demanding the games be stopped, considering the increasing risk of the Delta variant of COVID-19.

The World Health Organisation (WHO) President Tedros Gebreyesus, however, described the Opening Ceremony as a â€œCelebration of Hope.â€

I remember our national excitement in 1964 when Ghanaâ€™s football team beat host-nation 3-2 in the opening match. This was before TV arrived in Ghana. Nonetheless, ace commentators Festus Addae/Joe Lartey/William Opare brought proceedings vividly to our homes through radio.

Ghana is presenting a 14-member team in the 2020 Tokyo Olympics, hoping to improve on our total medals won of only four in all the Olympics so far.

Ghanaâ€™s first Olympic Games was in the Rome Olympics of 1960. She also won her first Olympic medal when Clement â€œIkeâ€ Quartey won a silver in boxingâ€™s light-welterweight division.

However, earlier, Ghana, then Gold Coast participated in the 1952 Helsinki, Finland Olympics.

Middleweight boxer Prince Amartey also won a bronze medal in the 1972 Munich, West Germany Olympics. Incidentally, it was at the Olympic Village in Munich that eight members of the Black September Movement of the Palestinian Liberation Organisation (PLO) murdered 11 members of the Israeli Olympic team.

Outside boxing, Ghanaâ€™s fourth medal so far was won by footballâ€™s Under-23 Black Meteors team which won bronze in the 1992 Barcelona, Spain Olympics.

Ghana boycotted the 1976 Montreal, Canada Games in protest of the participation of New Zealand which maintained sporting links with then apartheid South Africa.

Again in 1980, Ghana was one of 65 countries which joined the American-led boycott of the Moscow, Union-of-Soviet-Socialist-Republics (USSR)/Soviet-Union Games. This was in protest of the 1979 invasion of Afghanistan by the Soviet Union.

In the 1958 Commonwealth Games in Cardiff, Wales, Ghanaâ€™s first and only medal, a bronze was won by Robert Kotei, later Maj. Gen. REA Kotei.

In the 1960s, Ghana showed great potential in sports under the legendary Sports Director Ohene-Djan, particularly in athletics, boxing and football.

Â Unfortunately, we have not been able to translate our talents in winning Commonwealth Games medals into winning Olympic medals.

A new event to be hosted for the first time in Tokyo will be baseball. More interestingly, for the 2024 Paris, France Olympics, Break-dancing will feature as an Olympic sport! Perhaps, this might be a good opportunity for a young Ghanaian to win gold.