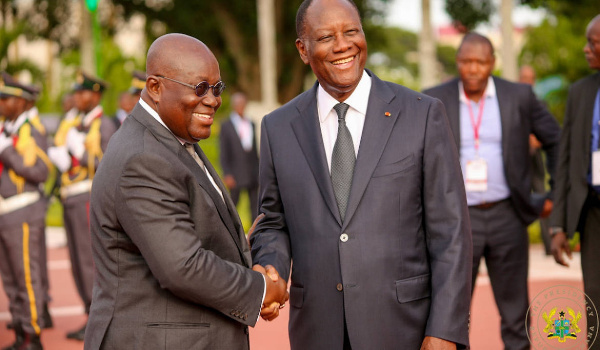 It is interesting to know that, in his congratulatory message to both presidents, the president of the Republic of Ghana, Nana Akufo Addo has urged them to accelerate the process of dialogue and reconciliation midst the key stakeholders of the political process in order to expel the presence of potential instability.

Nana Akufo Addo who was then spokesman for the Alliance for Change, responding to questions, puts the responsibility for the violence that erupted squarely on the government.

Ghana’s first gentleman now, then believed strongly that the ‘Kume Preko’ protest provided a forum for people to express their dissatisfaction with what was going on, in the country at the time.

Among the many statements made by Nana Akufo Addo, then spokesman of the Alliance for Change, there are two of them that many Ghanaians consider so profound; he said, the only regrets the Alliance for change has is that, ‘Ghana is still in the grip of people who have a very warped idea of a democratic system of government’.

The other problem, he said, is of people in power who feel that they should cling on to power without questions at all costs.
Our elders say, to sin by silence, when we should protest, make cowards out of men.

Dr. Charles Wereko- Brobbey, also a leading organizer of the ‘Kume Preko’ demonstration in his recent narration during the 25th celebration of the demonstration, confirmed that four (4) innocent Ghanaians were eventually listed as those who died on the fateful day of Thursday, 11th May, 1995.

They were 14-year-old Ahunu Hongar, 17-year-old Jerry Opey, 23-year-old Kwabena Asante and 43-year-old Richard Awungar.
Today, over 50 people have been killed in poll – linked violence since August, after the highest court of the Ivorian land affirmed the candidature of Mr. Ouattarra for a 3rd term. I strongly believe that many people see this as reviving the fears over a repeat of a post-election crisis a decade ago that left 3000 people dead.

The Ivorian situation is not different from Guinea, more than 90 people have been killed in a crackdown on Guinea President Alpha Conde’s bid to securing a controversial third term in elections.

On 7th October 2019 in Guinea, an opposition coalition, the National Front for the Defense of the Constitution (FNDC), which included trade unions and civil society groups started calling for demonstrations against an eventual 3rd -term in office for Conde.

They suspected that Conde, who is 82 years had plans of changing the constitution that would allow him contest this year’s elections.

President-elect Alpha Conde and Ouattara could only be in their current position to receive congratulatory message from Nana Akufo Addo because a constitution was authored to support their political interest at a time when they were still in power.

Green wood gives more smoke than heat but what does the congratulatory message from President Nana Akufo Addo to President -elect Alpha Conde and Ouattara says about him? Has there been a change in principle or just a brotherhood responsibility as an Ecowas chair?