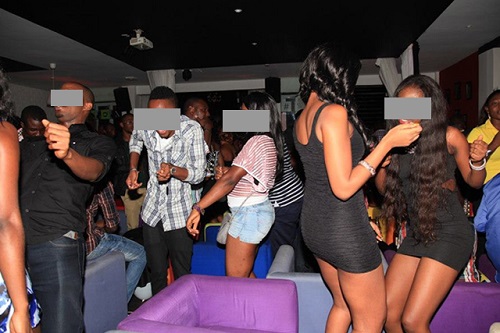 They finished their last paper and town was awash with T-shirts with interesting names. The T-shirts often have the unique names of the unique class and the members of the class are listed for ‘future memory use’.

For example, you would find class names like ‘Scholars of Ebibidro Class of 2019’, ‘Future Professors Class of 2019’ ‘3kro-bewu 2019’, ‘SM Class of Talkertives – Failure is part of life’ (as for this class, I think I know where the computer placement machine will dump them). One that amazed me and kept me laughing till now is this guy who had just returned from my hometown and wearing their class T-shirt: ‘The Ganyaglo Class of 2019’.

Abeg, ask any Ayigbeman what ‘Ganyaglo’ means. Under the class name were individuals’ names like: ‘Azoto Gugui’, ‘Accra Aka’, ‘Sagidi’, ‘Juju Strong’, ‘I fear no bullet’, ‘MyGodisAble’, ‘Silent Killa’, ‘Black Mamba’ ‘BHIM’, ‘Tema Station’ ‘Dead Buddy’, ‘Boy Fishes’ and I wonder if their parents are aware of these nicknames they have bestowed on themselves. After struggling to take care of children up to this level and he or she comes back with such huhudious names, do you think deliverance will help? I doubt. Maybe a crusade!

Relax, guys; as teenagers we all did so in the past so it’s normal. My own name was ‘Aborbor Tatale’! Hahaa! Sometimes when I see them, I sit back, I wonder if we also ever had the same feelings of ‘accomplishment’ just after writing BECE at our time. Maybe they have no idea that WASSCE, Undergraduate and Postgraduate and beyond are all waiting for them.

These days I find myself in too many troubles o. So long as I am still ‘economically active’, why not! I just met this one last Sunday and she came across as a good ‘food for thought’! We exchanged telephone numbers. Then whatsapping started. Then I started with my ‘useless ‘I miss you’ ‘I miss you’ n*ns*nse! How can you miss somebody you barely knew? God should exorcise this spirit of ‘promise-security’ out of us oo, men! Eish!

Two days later, she sent a message asking for help and that she urgently needs GHC500 to top up to pay school fees. I felt some way. Something said, try and send something small since you want to ‘eat’ and another kept telling me not to send anything since she could easily pass for a ‘pre-paid’ girl. She ‘exploits’ you first before the eyi even though giving ‘it’ to her is not guarantee that you will have ‘it’.

In fact I was bold enough, called her and asked her why so soon. In her response, she explained that the GHC500 was actually registration fee. She also wondered how come we barely knew each other and I kept saying ‘I miss you’ ’I miss you by ‘heart’? YOU MISS ME, I WANT 500. Simple!’ So if she also needs GHC500, then it just falls in line. It’s pre-paid, give it to her, my brother!

I blocked her line o.

Some of them are not smart; the smart ones ask for GHC50 and GHC30 and you are compelled to give slightly higher and before you know it, you end up spending GHC600 on such a person without knowing!

When I first met Ablavi, I gave her GHC100 and she complained that it was too much. In my head, I said this girl must be modest. Then subsequently, she would ask for GHC35 or GHC23! You won’t believe that Ablavi ever asked me to send her GHC4! As we speak, I have never given her anything less than GHC50 upon request even though she has also never asked for anything above GHC35 but the interesting thing is that by the end of the month, put together, I spend not less than GHC600 on her! This village girl is smarter than many of the city girls.

Hotel bill GHC120, Condom GHC11, Food for the two of you, GHC40, chewing gum GHC1, Fuel for your car GHC150, T&T for her GHC200 (externally imported from the regions), bottled water GHC2.50, fruit juice GHC10, short bread biscuits GHC10,Vaseline (depending) GHC5. Total = GHC539.50. This is how much some people (not me o…haa) spend on girls for fun at least twice every month. If you are not lucky and you meet the wrong girl from the beginning, prepare to pay registration fee of GHC500 plus GHC539.50 = GHC1,039.50. Let’s assume you are spending GHC539.50 every week and twice in a month, you would be spending GHC1,079 per month on the same ‘thing’ you would get at home almost for free.

Provision should be made for occasional mobile money at least GHC100 for two in a month = GHC200. Add that to GHC1,079 and you are running into GHC1,279.00 every month and at the end of the year, you would have done GHC15,348.00! Can’t this buy you a plot of land or pay fees for your children? That ‘useless’ thing in between your eyi keeps ‘spending on you’ or rather you spending on it and you keep saying things are hard!

As part of the miscellaneous items, don’t forget those you have ‘touched’ in the past. Some of them think it is a lifetime investment and so somebody you touched in 2011 keeps asking for favours and in a way, you feel obliged to show continuous appreciation even though you are no longer ‘touching’.

This amount is the average expenses an average womanizer spends on ‘promise-security’, according to my best friend, not me o. And your salary is GHC3,000. By the middle of the month, you are broke and getting angry ‘by hat’ while asking God to open doors for you. Ei! God is indeed a merciful God; He still listens.

The sad part is that our poor wives keep praying for us for breakthroughs and we keep these useless expenses on our balance sheets to block our own chances.

Sometimes you see how much you’ve spent and think that if you have to use condom, it will be a ‘waste’ and then think that this ‘meat’ must be eaten raw and then you keep spreading diseases around. God forgive you and I.

SIN FASCINATES AND ASSASSINATES and HIV is there o. If you fall sick and you are lucky you are in America, the people visiting you at the hospital would say ‘Wishing you a speedy recovery’ In the UK, they would say ‘Get well soon dear’. Let a fellow Ghanaian visit you on the hospital bed and how he will wish you: ‘the same thing killed Yaovi’! Case close!

Is it not about time we started including the cost of womanising into our inflation food basket? Like the way it would shoot up er! Hmmm!

People are spending too much o yet the salary cannot match all of these and our homes and we keep complaining things are hard. Really? Check your little little expenses first. Put pen to paper and you would be surprised!

God be with us all and our families this weekend as I pray for forgiveness for ‘useless’ sins and expenses!

Though today is 21st and I am broke, I thank God I am not a womanizer and thank God again that the days of Ananias and Saphirah are gone or else by now after making this declaration….Ala!

Indeed for some individuals and companies, their financial year starts from July. As you prepare to enter July, is your opening balance less than GHC15,348.00? If not, then you have deficits to clear; we have 9 days for us to enter July. Double up and cry later.

However, if your opening balance is more than GHC15,348.00 let your wife know and give her an unaudited account balance and see if she will not pack out since you continue to commit a family economic suicide!

Dr Tindanbil, please don’t be looking at me like that la. weytin I talk? Hahaaaaaaa!