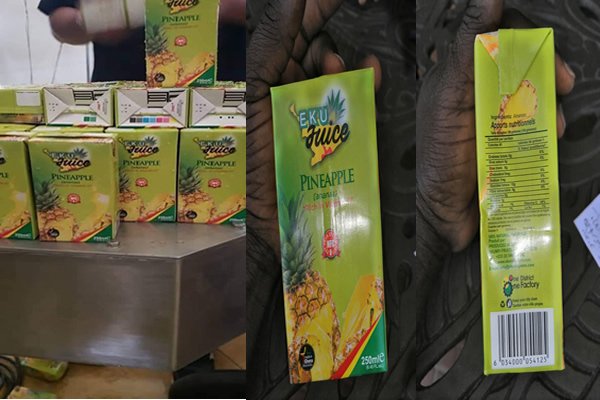 Sample of the juice

The factory is under the One District One Factory project introduced by the Akufo-Addo government.

The nicely packaged pineapple 'Eku Juice' can be compared to those imported into the country. This juice is not from concentrates as the others are.

This was made known by Dr. Afriyie Akoto, the Food and Agric Minister, on his Facebook page on November 16, 2019.

The $8 million project which officially commenced in March 2018 now has 400 workers including out-growers.

Think tank Alliance for Development and Industrialisation (ADI), in October 2019 said its checks revealed that the Ekumfi Juice Factory would create 5,000 direct out-grower jobs within the community and its environs.

The facility is the biggest pineapple juice processing factory in West Africa, with the capacity to process ten tonnes of fruits per hour. it is also the first factory to be constructed under the government’s ‘One District One Factory’ project.

The factory is sited on a 50-acre land and has 100-metres length and 50-metres width of factory floor space large enough for additional production works.

The 'One district, one factory' is a Government of Ghana policy which is aimed at creating jobs for Ghanaians through the setting up of factories and industries which will, in turn, move the country towards greater industrialisation.

The policy was first introduced to Ghanaians in 2016 as part of the manifesto of the New Patriotic Party of Ghana.