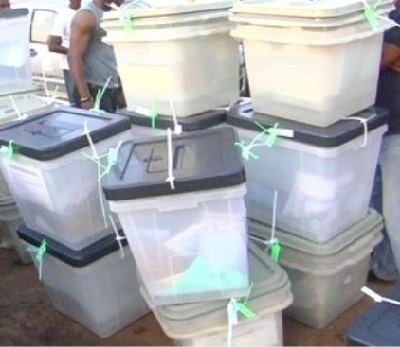 One person has been shot dead at Awutu Senya West in the Central Region.

The deceased is said to have stormed the polling station together with some known land guards and decided to snatch a ballot box.

They destroyed properties belonging to the Electoral Commission and one attempted to snatch a ballot box but was fired by the security officer at the station.

George Andah is the Member of Parliament of the Awutu Senya West Constituency and is standing again on the ticket of the NPP, his closest contender is Gizella Tetteh-Agbotui of the NDC.

In the early hours of the election, an EC official issuing defective ballot papers at the Awutu Breku DA JHS polling station has been arrested.

The official is currently in the custody of the Awutu Breku District Police Command.

Pictures making rounds on social media indicate that voters are being issued with ballot papers without the portion of the presidential candidate of the NPP Akufo-Addo.

Counting of ballot papers has begun in most centres nationwide as voting has ended.