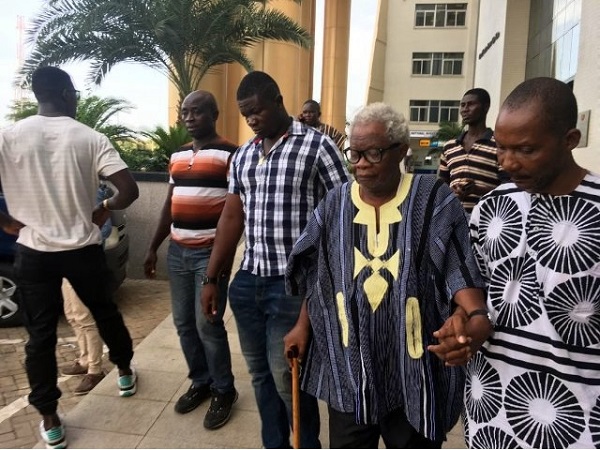 Five members of the Volta secessionist group, Homeland Study Group, have been charged with treason felony after they were arrested yesterday and put before court today, November 20, 2019.

Peter Godfriend Edem was said to be the Master of Ceremonies [MC] at the event where the Western Togoland independence was declared.

According to documents from the court, Mkpe Tornyi Kudjo admitted to police that he was a Western Togolander ad Kofi Agbeko serves the treasurer of the group.

Some ten members of the Volta secessionist group, Homeland Study Group Foundation have been arrested by the Volta Regional Security Council. This comes after the group declared parts of Ghana as independent ‘Western Togoland State’.

The leader of the group, 80-year old Charles Komi Kudzordzi, popularly known as Papavi Hobedetor, made the independence declaration at a public gathering in Ho on Saturday, November 16.

He cited the recent omission of roads in the Volta Region from the Critical Roads list in the 2020 budget, as evidence that they have been neglected by the government.

The government subsequently asked Ghanaians to disregard the declaration and promised to deal with the group.

In May, about 81 members of the separatist group were arrested for assembling for a protest over the arrest of seven leaders of the Homeland Study Group Foundation.

Charles Kormi Kudzodzi – popularly known as Papa Hogbedetor, had been arrested along with seven others when they first declared their intent to secede at one of the group’s regular study meetings.

The Attorney General in July 2019 eventually withdrew all charges brought against the members of the Homeland Study Group Foundation who were working for the secession of the Volta Region from Ghana.

The group first made calls for the secession of the Volta Region through to parts of the Upper East region.

The group claims that the area was an independent State before being made to join Ghana in the 1956 plebiscite.