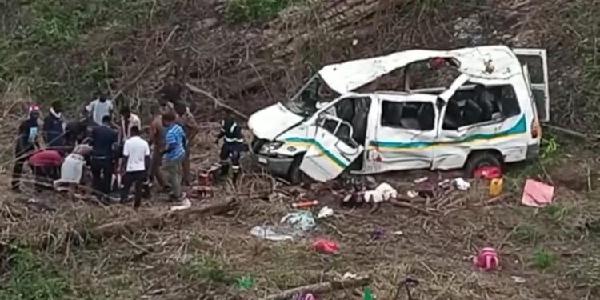 Six people have been confirmed dead in a fatal accident which occurred at Aprede mountain in the Okere District of Eastern Region, Friday, October 7, 2022.

The incident which occurred around 1:30pm involved a Sprinter Benz bus with registration number GY 1570-13 which was conveying some passengers from Koforidua to Aflao to attend a funeral.

According to another driver, Mr. Tetteh, who was coming from the opposite direction and witnessed the accident, he signaled the Sprinter Benz bus driver who was over-speeding while descending the mountain to reduce his speed due to the nature of the road but he ignored.

The driver on reaching a sharp curve allegedly lost control of the wheel due to the speed at which the vehicle was traveling at and the vehicle somersaulted in the process before landing in to the ditch.

Meanwhile, other passengers who were badly injured are currently on admission at the Yilo Krobo Government Hospital in Somanya.

“The driver should be blamed, he was over speeding and I told him to reduce it but he did not even look at me so I am not surprised this unfortunate incident has happened, the car somersaulted severally” he stated.