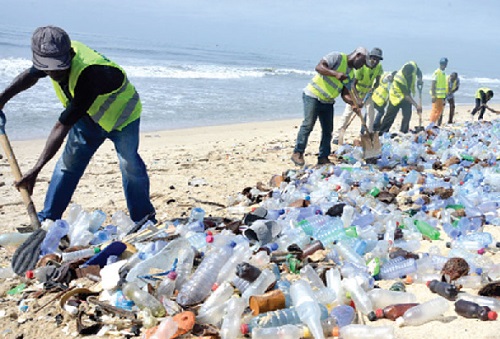 Commonwealth Countries have been told to find proper ways of managing plastics in order to help improve environmental sanitation.

In a model Commonwealth Heads of Government Meeting (CHOGM), to mark Commonwealth Day, students from the British International School and Hydeson International minced no words in challenging governments of member countries to take bold steps in managing the canker of plastics.

It was an exciting spectacle at the British Council for students between ages 8-15 debate an issue of utmost importance before Commonwealth dignitaries.

Mr. Okudzeto applauded the efforts of the kids who demonstrated the values of the Commonwealth which is also centered on the promotion of literacy and education across member countries.

He was quick to touch on the subject of the debate and the need to better manage plastics in the Commonwealth countries.

Using Rwanda as an example, Mr. Okudzeto said “where there is a political will, there is way,” and charged member countries to begin to follow the path of the Central African country by taking bold steps in banning plastics and enforcing sanitation laws.

The British High Commissioner to Ghana Ian Walker who, before the model CHOGM debate, was asked by the model ‘Queen’ of England to sit by her, said there is a lot to achieve together within the Commonwealth.

According to him, trade amongst the Commonwealth alone is worth over $3 trillion and with over 2.5 billion population, a lot more can be done between the 53 Commonwealth countries.

Head of the CHRI, Mina Mensah challenged the members of the Commonwealth to make its relevance felt amongst the citizenry.

She did not understand why the youth in Ghana, most of who are to benefit from the initiatives of the Commonwealth do not know about what the association stands for.

On his part, the Africa head of the Royal Commonwealth Society, John Apea said the theme for this year’s Commonwealth Day which is a “Connected Commonwealth” couldn’t have come at a better time.

Like the UN, the Commonwealth is a family which must pool its resources together for the greater good of the citizens, he said.

He acknowledged the support of partners and stakeholders in making the Commonwealth great.

The 70th Commonwealth Day event was attended by students of the Akropong School of the Blind, La Wireless Cluster of Schools, Roman Ridge School, Kinbu Technical and the Ghana International School.

Ghanaian rapper, Kwesi Arthur who is also a Royal Commonwealth Ambassador was in attendance.

Commonwealth Day is celebrated across 53 member countries as a symbol of unity and to usher in programs and activities to promote good governance, freedom and justice, respect for human rights, free trade and better education for a particular year.

The Akropong School of the Blind were presented with books by Book Aid to help in teaching and learning in the school.