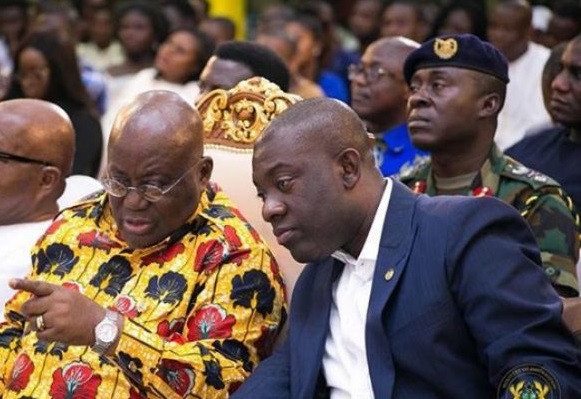 President Akufo-Addo has congratulated Minister for Information Kojo Oppong Nkrumah (MP), after he was selected as a Young Global Leader for 2020.

Mr. Nkrumah was selected as one of 115 leaders who the forum describes as Worldâ€™s Most Promising Leaders under the age of 40 selected from over 2000 nominations from around the world.

Mr Oppong Nkrumah one of Ghana's youngest Minister's was rewarded for his hard work and the President congratulated him on social media.

The President reacting to the announcement in a post via Twitter said; "Warm congratulations to the hardworking Minister for Information, Hon. @konkrumah, on his selection as one of the 2020 Young Global Leaders of the World Economic Forum (@YGLvoices)." 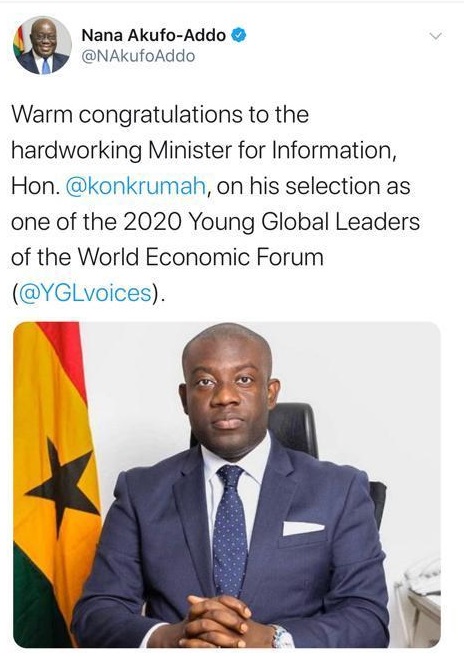 The forum also selected the Prime Minister of Finland Sanna Marin, Vice-President of Ecuador Otto Sonnenholzner, Chief Economist Allianz Germany Ludovic Subran and Meagan Rapinoe who is the Senior Captain of the US Womenâ€™s National Team.

According to the World Economic Forum, the selected finalists were chosen after a â€œrigorous process and are expected to continue driving innovation for positive change across civil society, arts, culture, government and businessâ€.

Over the next five (5) years, the selected leaders are expected to use their skills and competencies as exceptional people to build the vision, courage and influence to drive positive change in the world. Their work across various sectors is expected to improve the quality of lives and enhance livelihoods.