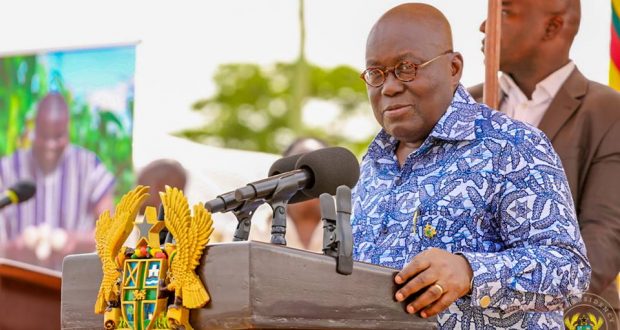 President Akufo-Addo has announced that plans are underway to construct five new district hospitals in the Western Region to reduce pressure on the already existing facilities.

Akufo-Addo explained that since new communities had sprung up and the country’s population was increasing, there was the need for more hospitals to be established to cater for each citizen.

President Akufo-Addo said this in Tarkwa, when he interacted with some chiefs in the Western Region.

Some Ministers of state, Deputy Ministers, Members of Parliament, Metropolitan, Municipal and District Chief Executives from the Western Region and party leadership accompanied the President during his three-day tour to the Western Region.

The President told the gathering that the project would commence this year and would benefit the people of Bogoso, Nsueam, Axim, Mpohor and Akotombra when completed.

Osabarima Kwaw Entsei II, Omanhene of Mpohor traditional area, on behalf of his colleagues asked the President what he was doing to improve the poor road networks in and around mining communities and revive the Bonsa tyre and Aboso glass factories that have been abandoned for years.

He reminded the President of the promise he made during the 2016 election to increase mineral royalties to 10 per cent for chiefs in mining areas.

In his response, Akufo-Addo reassured the chiefs of honouring his promise as he was having discussions with the Minerals Commission.

On the Bonsa tyre factory and Aboso glass factories, the President said they were yet to complete a feasibility study on the two projects to help the government know its true state.

Akufo-Addo indicated that the roads in Tarkwa Township would be constructed this year.

In addition, the President noted that he has met leaders of the various mining companies in the country to enable them to support the government in improving roads in Tarkwa, Prestea, Obuasi and other mining communities.