All you need to know about Marburg virus disease 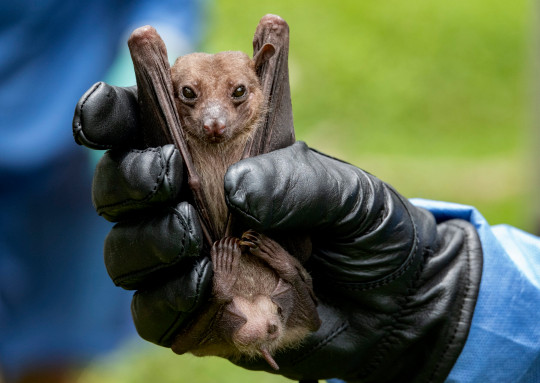 Marburg virus disease (MVD) is a rare but severe hemorrhagic fever which affects both people and non-human primates. MVD is caused by the Marburg virus, a genetically unique zoonotic (or, animal-borne) RNA virus of the filovirus family.

The six species of Ebola virus are the only other known members of the filovirus family.

Marburg virus was first recognized in 1967, when outbreaks of hemorrhagic fever occurred simultaneously in laboratories in Marburg and Frankfurt, Germany and in Belgrade, Yugoslavia (now Serbia). Thirty-one people became ill, initially laboratory workers followed by several medical personnel and family members who had cared for them. Seven deaths were reported. The first people infected had been exposed to Ugandan imported African green monkeys or their tissues while conducting research. One additional case was diagnosed retrospectively.

This Rousettus bat is a sighted, cave-dwelling bat widely distributed across Africa. Given the fruit bat’s wide distribution, more areas are potentially at risk for outbreaks of MVD than previously suspected. The virus is not known to be native to other continents, such as North America.

MVD typically appears in sporadic outbreaks throughout Africa. Laboratory confirmed cases in people have been reported in Uganda, Zimbabwe, the Democratic Republic of the Congo, Kenya, Angola, and South Africa. Many of the outbreaks started with male mine workers in bat-infested mines. The virus then spreads within their communities through cultural practices, under-protected family care settings, and under-protected health care staff. It is possible that sporadic, isolated cases occur as well, but go unrecognized.

Human cases of MVD have occurred outside Africa, such as during the 1967 outbreak, but are infrequent. In 2008, a Dutch tourist developed MVD after returning to the Netherlands from Uganda, and subsequently died. Also, in 2008, an American traveler developed MVD after returning to the US from Uganda and recovered. Both travelers had visited a well-known cave inhabited by fruit bats in a national park. See the History of Outbreaks table for a chronological list of known cases and outbreaks.

It is unknown how Marburg virus first spreads from its animal host to people; however, for the 2 cases in tourists visiting Uganda in 2008, unprotected contact with infected bat feces or aerosols are the most likely routes of infection.

After this initial crossover of virus from host animal to people, transmission occurs through person-to-person contact. The virus spreads through direct contact (such as through broken skin or mucous membranes in the eyes, nose, or mouth) with:

Blood or body fluids* (urine, saliva, sweat, feces, vomit, breast milk, amniotic fluid, and semen) of a person who is sick with or died from Marburg virus disease, or
Objects contaminated with body fluids from a person who is sick with or has died from Marburg virus disease (such as clothes, bedding, needles, and medical equipment).
Semen from a man who recovered from MVD (through oral, vaginal, or anal sex). The virus can remain in certain body fluids (including semen) of a patient who has recovered from MVD, even if they no longer have symptoms of severe illness. There is no evidence that Marburg virus can spread through sex or other contact with vaginal fluids from a woman who has had MVD.
Spread of the virus between people has occurred in close environments and among direct contacts. A common example is through caregivers in the home or in a hospital (nosocomial transmission).

In previous outbreaks, people who have handled infected non-human primates or have come in direct contact with their body fluids have become infected with Marburg virus. Laboratory exposures can also occur when lab staff handle live Marburg virus.

*Data on Marburg virus is limited. However, as Marburg virus is in the same family as the virus that causes Ebola virus disease, it can be assumed that virus persistence in body fluids may be similar.

After an incubation period of 2-21 days, symptom onset is sudden and marked by fever, chills, headache, and myalgia. Around the fifth day after the onset of symptoms, a maculopapular rash, most prominent on the trunk (chest, back, stomach), may occur. Nausea, vomiting, chest pain, a sore throat, abdominal pain, and diarrhea may appear. Symptoms become increasingly severe and can include jaundice, inflammation of the pancreas, severe weight loss, delirium, shock, liver failure, massive hemorrhaging, and multi-organ dysfunction.

Clinical diagnosis of Marburg virus disease (MVD) can be difficult. Many of the signs and symptoms of MVD are similar to other infectious diseases (such as malaria or typhoid fever) or viral hemorrhagic fevers that may be endemic in the area (such as Lassa fever or Ebola). This is especially true if only a single case is involved.

The case-fatality rate for MVD is between 23-90%. For a complete listing of the case fatality rates for each outbreak, please see the History of Outbreaks table.

People may be at risk of exposure to Marburg virus if they have close contact with:

Exposure risk can be higher for those travelers visiting endemic regions in Africa who have contact with fruit bats (Rousettus aegyptiacus), or enter caves or mines inhabited by these bats.

Clinical diagnosis of Marburg virus disease (MVD) can be difficult. Many of the signs and symptoms of MVD are similar to other infectious diseases (such as malaria, typhoid fever, or dengue) or viral hemorrhagic fevers that may be endemic in the area (such as Lassa fever or Ebola). This is especially true if only a single case is involved.

If a person has early symptoms of MVD and a possible exposure to Marburg virus, the patient should be isolated and public health professionals notified. Samples from the patient can then be collected and tested to confirm infection.

Antigen-capture enzyme-linked immunosorbent assay (ELISA) testing, polymerase chain reaction (PCR), and IgM-capture ELISA can be used to confirm a case of MVD within a few days of symptom onset. Virus isolation may also be performed but should only be done in a high containment laboratory with good laboratory practices. The IgG-capture ELISA is appropriate for testing persons later in the course of disease or after recovery. In deceased patients, immunohistochemistry, virus isolation, or PCR of blood or tissue specimens may be used to diagnose MVD retrospectively.

Treatment
There is no specific treatment for Marburg virus disease. Supportive hospital therapy should be utilized, which includes balancing the patient’s fluids and electrolytes, maintaining oxygen status and blood pressure, replacing lost blood and clotting factors, and treatment for any complicating infections.

Experimental treatments are validated in non-human primate models but have never been tried in humans.

Preventive measures against Marburg virus infection are not well defined, as transmission from wildlife to people remains an area of ongoing research. However, avoiding fruit bats (Rousettus aegyptiacus), and sick non-human primates is one way to protect against infection.

Measures for prevention of secondary, or person-to-person, transmission are like those used for other hemorrhagic fevers. If a patient is either suspected or confirmed to have Marburg virus disease (MVD), infection prevention and control measures should be used to prevent direct physical contact with the patient. These precautions include wearing protective gowns, gloves, and masks; placing the infected individual in strict isolation; and sterilization or proper disposal of needles, equipment, and patient excretions.

MVD is a very rare disease in people. However, when it occurs, it has the potential to spread to other people, especially healthcare staff and family members who care for the patient. Increasing awareness in communities and among healthcare providers of the clinical symptoms of patients with MVD is critical. Better awareness can lead to earlier and stronger precautions against the spread of Marburg virus in both family members and health-care providers.

Improving the use of diagnostic tools is another priority. With modern means of transportation giving access even to remote areas, it is possible to obtain rapid testing of samples in disease control centers equipped with Biosafety Level 4 laboratories (laboratories equipped with the highest level of biosafety precautions) to confirm or rule out Marburg virus infection.