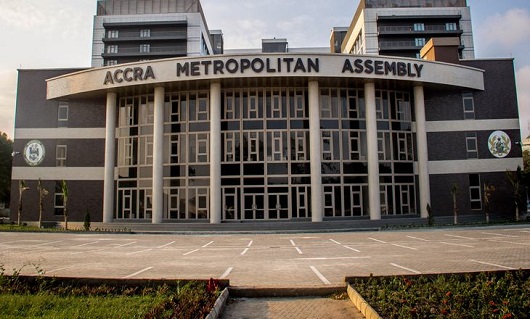 The Accra Metropolitan Assembly (AMA) have arrested 9 persons for dumping and burning solid waste in an open space causing smoke nuisance and posing serious health hazards to residents nearby.

The 9 were arrested during an Operation Clean Your Frontage (OCYF) enforcement exercise by a team from the AMA, in collaboration with the Greater Accra Regional Coordinating Council (GARCC) and Zoomlion Ghana Limited to sanitise and keep the streets of the metropolis clean by desilting choked drains and gutters to allow free flow of water, sweeping as well as removing all obstructions.

Mayor of Accra, Hon. Elizabeth Naa Kwatsoe Tawiah Sackey who supervised the exercise used the opportunity to call on residents to desist from burning waste to help reduce air pollution in the city.

According to her the indiscriminate burning of refuse, smoke from vehicles and unclean cooking methods were the leading causes of air pollution in the city adding that globally 7 million people die prematurely every year from air pollution and among these deaths 34 percent, 21 percent, and 20 percent are from Ischaemic heart diseases, pneumonia and strokes, respectively.

She warned that the Assembly would not hesitate to arrest and prosecute any person involved in any act of open burning in accordance with the law.

"Burning waste is illegal under the by-laws of the Assembly because there can be toxic chemicals in the items which contaminate the air we breathe," she said.

She reiterated that under the 2017 Sanitation bye-law of the AMA a person commits an offence if that person burns solid waste in the open, or indiscriminately dumps solid and liquid waste in open spaces, drains and behind walls and added that those found culpable were likely to pay a penalty of not less than 100 penalty units and not more than 150 penalty units, or would go to prison between three to six months or both.

She used the opportunity to urge residents to support the agenda to ensure clean air.