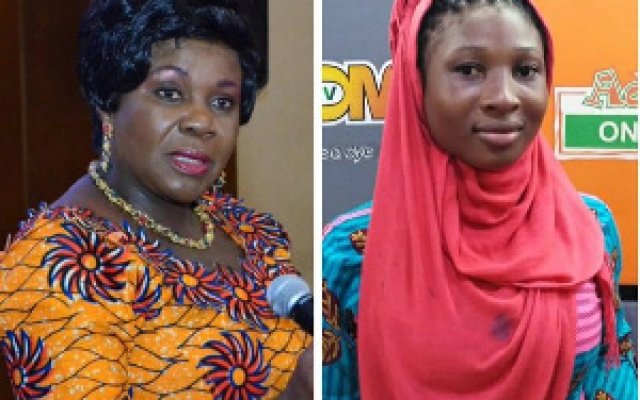 A group called the Concerned Interns in Media (CIIM) have asked Minister for Sanitation, Cecilia Dapaah, to apologize to Rahinatu Abdul Bach, an intern at Adom FM, for disrespecting and deeming her unfit to directly call her on the mobile phone let alone interview her.

Mrs Dapaah told Rahinatu on the phone, emphasising that her request for an interview was disrespectful of her as a state official and her office.

“Who gave you the permission to call me to speak to me directly like that?” the Minister queried the Ghana Institute of Journalism student.

“You don’t respect … please go off”, she said as she dropped the call.

The intern had been directed by her editor Samuel Dowuona to get the Ministry’s reaction to reports that some persons caught littering were ordered by either the police or ordinary citizens to clean the streets as punishment.

CIIM in a statement called on Madam Dapaah to apologize or they will be compelled to petition the presidency.

We the CONCERNED INTERNS IN MEDIA (CIIM) have noticed with regret the verbal assault rained on an intern with Adom FM, Rahinatu Abdul Bach who is also a student at the Ghana Institute of Journalism (GIJ) by Minister of Sanitation, Cecelia Dapaah.
Our checks indicate that the rather unfortunate event which occurred on July 12, 2019, has since left the young lady in a state of emotional trauma. Rahinatu Abdul Bach’s only crime was to enquire from the Minister her reaction to reports persons caught littering are ordered to pick up the litter or sweep streets. Sadly this angered the minister who could not understand why an intern would be asked by her editor to interview a minister of State.

Interestingly, when the Minister was quizzed by Adom FM’s editor on the issue, she maintained that the radio station shows respect to her office by not sending interns to interview her.

We the CONCERNED INTERNS IN MEDIA (CIIM) see this as an attack on the media and in an era where our seniors face constant attacks on the job, we think this is an affront to government’s effort to ensure the security and safety of journalists.

Even though Rahinatu Abdul Bach was not physically attacked, the emotional torture she went through in the hands of Madam Cecelia Dapaah has made her very afraid to continue in her work especially conducting interviews.

We are by this release demanding an apology from Madam Cecelia Dapaah, failure of which will compel us to petition the presidency. We also humbly call on the GJA to intervene and ensure the safety of all journalists, whether interns or not.

We stand with Rahinatu and say “INTERNSHIP IS NOT INCOMPETENCE!”