The Asantehene, Otumfuo Osei Tutu II, will make a historic visit to Anloga in the Volta Region on Saturday to attend the Hogbetsotso festival.

The Asantehene, who will be the Special Guest at the festival, will be accompanied by a large delegation of chiefs and courtiers from Asanteman.

The Hogbetsotso festival of the Anlos of the Volta Region is celebrated to commemorate the exodus of the Ewe people from the tyrannical rule of King Agorkorli in Togo.

For this year, the Anlos had programmed to give the festival a unique mix of the cultures of the Anlos and Asantes. 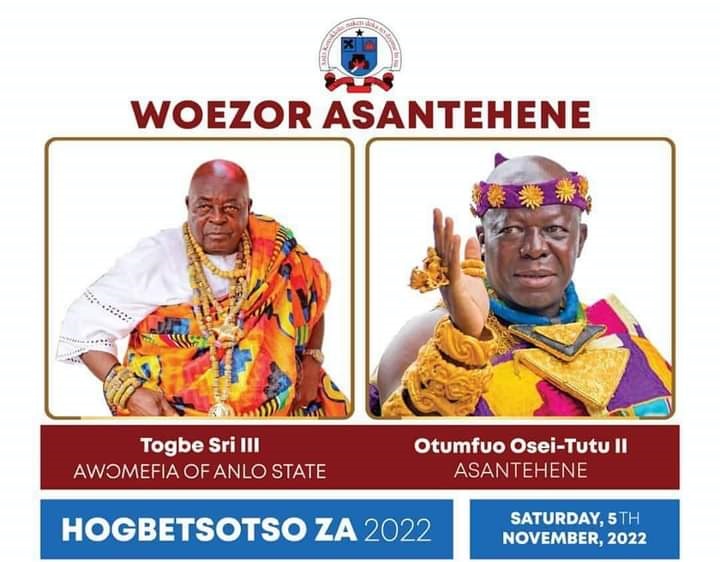 Earlier this year, the Awoamefia of the Anlo State, Togbui Sri III, officially extended an invitation to Otumfuo Osei Tutu to attend this year's Hogbetsotso festival.

A delegation from the Anlo State led by Togbui Tenge Dzokoto was at the Manhyia Palace in Kumasi to hand over the invitation to Otumfuo in line with tradition.

Asanteman and Anlo have both acknowledged the long history of friendship between them.

In 2018, Togbui Sri III was in Kumasi with a delegation of about 170 from his traditional area, to attend the last Akwasidae festival for the year.

After the event, the Manhyia Palace took its twitter handle to celebrate Togbui Sri for the visit.

“Asantehene celebrated the last #Akwasidae for the year 2018 in grand style at Manhyia Palace with Togbui Sri III being the Special Guest of Honour,” the Manhyia Palace tweeted.

At that Akwasidae, Otumfuo Osei Tutu recounted how Asantes and Anlos had lived together as brothers and sisters without any problems, and called for the sustenance of the relations.

“My uncle, Otumfuo Sir Osei Agyeman Prempeh II, had the extraordinary challenge of managing the full integration of Asante into what is now the united Republic of Ghana. He was always proud that statesman as he was, he was able to draw a great deal from the Awoamefia’s great uncle, Togbui Sri I, and from some of the eminent sons of the Anlo State,” Otumfuo Osei Tutu said.

He added: “His (Otumfuo Osei Agyeman Prempeh’s) personal physician was Dr R.E.G. Amraoti, one of the finest physicians and scientists of his time; and his lawyer was the renowned B.E.A. Tamakloe, who was to become the lawyer of Asanteman during the very difficult years before independence.”

Otumfuo Osei Tutu further indicated that the allocation of a suburb in Kumasi known as Anloga, as well as the allocation of some positions in the Asante Kingdom to Anlos, attested to the fact that the Anlos and Asantes had no conflict between them.

The Awoamefia, also expressed his appreciation to the Asantehene and the people of Asanteman for the way they had lived in peace with Anlos in the Ashanti Region.