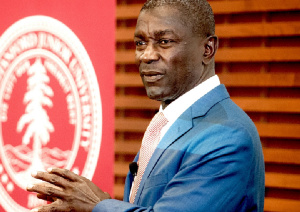 An Accra Circuit court has granted bail to the President of UT Holdings, Prince Kofi Amoabeng.

The business leader was put before court on Tuesday to face charges of stealing and money laundering in the collapse of UT Bank Ghana Limited.

He was granted bail, by the court presided over by Justice Essandor, to the tune of GHS110 million with two sureties who earn not less than GHS 2,000.

As part of the bail conditions, Mr. Amoabeng is also to deposit his passport and report to the police twice a week.

Justice Essandor in explaining his decision said it was based on “sound advocacy” by lawyers of Kofi Amoabeng.

READ ALSO: UT Bank could’ve survived if BoG had given us time – KofiAmoabeng

Kofi Amoabeng was put before court together with the CEO of defunct Beige Bank, Mike Nyinaku.

According to the prosecution, the two men who run different organizations allegedly misappropriated funds in excess of GH¢200 million belonging to their customers.

The prosecution said investigations were still ongoing into their separate cases to ascertain the full extent of their offences.

The Bank of Ghana on August 14, 2017, announced that it had revoked the license of UT Bank and ordered GCB Bank to take over its operation because it had a severe capital impairment.

Provisional figures released by the central bank showed the total liability of UT Bank stood at GH¢850 million while its total asset was pegged at GH¢112 million.

“If you take the case of UT Bank, we are suing related companies associated with UT Bank — UT Holdings and we are claiming an amount in excess of GH100 million”, Mr. Nipah said.

But speaking on the matter after nearly two years after the BoG’s action, Kofi Amoabeng in a TV interview said the fortunes of the bank could’ve been turned around if the Bank of Ghana had given him more time.

The government found us in that situation, [but] was this the best route to take? because we had investors who were ready with some proposals. They [government] decided that the best thing is to close down UT Bank which I find really difficult to take but from where they are sitting, they decide that was the best thing for the country. I don’t bear grudges but the point is if as UT Bank we owed GH¢800 million and an investor comes and he says I’m ready to pay GH¢400 million [so] Bank of Ghana write off the [other] GH¢400 million, but BoG takes a decision to close down the bank which will cost the nation at least GH¢ 2.2 billion, it doesn’t make sense to me,” he said.